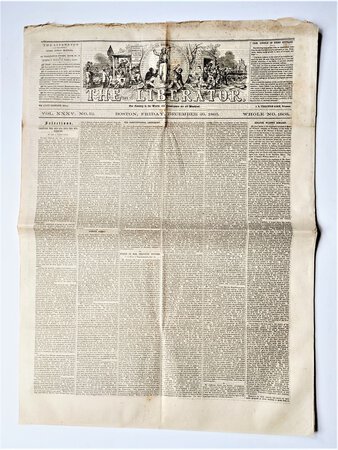 This is the Famous and Rare FINAL EDITION of The Liberator. It celebrates the ratification of the 13th Amendment that Abolished Slavery, and contains an UNPUBLISHED EXTRACT from a LETTER by ABRAHAM LINCOLN.

THIS IS THE ORIGINAL FINAL ISSUE of this important anti-slavery paper. It is the corrected second printing of the final issue, with the added thanks to Reverend May on the third page, and with the additional letter from William C. Nell on the fourth page. Authors include Lydia Maria Child, E. Cady Stanton, Garrison, et al. Lydia Maria Child was, like Garrison, a prominent abolitionist.

Beautiful front page engraving. On the left side are White slave owners selling their "Slaves, Horses & Other Cattle"; on the right side are Blacks entering the land of Emancipation; in the middle is a picture of Jesus with a Black man and White man at his feet and the statement: "I come to break the bonds of the Oppressor". Running through the illustration is a banner stating: "Thou Shalt Love Thy Neighbor As Thy Self".

Edited by William Lloyd Garrison, Printed by J. B. Yerrinton & Son, with articles by and/or about William Garrison, Lydia Maria Child, Thaddeus Stevens, Abraham Lincoln, and many others.

Front page has a twenty-two line extract from an UNPUBLISHED LETTER "from the late PRESIDENT LINCOLN, addressed to Gen. Wadsworth, taking strong ground in favor of universal suffrage", and also a three column article on "The Constitutional Amendment" (abolishing slavery).

Other articles include: "Through the Red Sea into the Wilderness" by Lydia Maria Child (8 lengthy paragraphs), "William Lloyd Garrison and the Liberator" (printing remarks by Garrison), and "Political Rights of Women," printing the text of a 26 line letter from Elizabeth Cady Stanton to William Lloyd Garrison. This issue also includes poems by J. C. Hagan, Sarah T. Bolton, Joel Benton, et al. One of the poems is titled: "A FAREWELL TO THE LIBERATOR", another "Slavery's Funeral March". Again, this was the final issue of "The Liberator," with articles on the abolition of slavery and universal suffrage.

GOOD condition, creasing from where the issue was folded both horizontally and vertically, foxing at the folds, margins, and a bit here and there, age toning / darkening to the edges and some of the folds, some closed tears and small chips to the extremities and folds, a small hole at the intersection of the horizontal and vertical fold, tenderness to some of the folds. Despite the expected wear, this original 155+ year old newspaper remains a complete, sturdy, bright and clear copy.

The issue will be sent folded, as is its normal state. Please handle this rare item carefully, it has survived the assassination of Lincoln and the subsequent century and a half, but it can be easily damaged.

This FINAL ISSUE of THE LIBERATOR, with the unpublished Lincoln text and tributes to Garrison and his paper, is considered to be the Publication's MOST VALUABLE and HIGHLY SOUGHT AFTER ISSUE. You can read about THE LIBERATOR newspaper, and about many of the contributors in this final issue, on Wikipedia and elsewhere on the Internet.

See more photos of the issue on the Internet at Blank Verso Books.