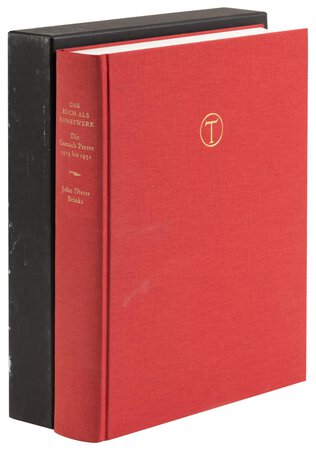 (THE BOOK AS A WORK OF ART - THE CRANACH PRESS of COUNT HARRY KESSLER. Edited by John Dieter Brinks.)

Published by Triton Verlag, Laubach and Berlin, and Williams College, Williamstown, MMV (2005). Second Edition (Zweite Ausgabe). TEXT in GERMAN. (This is the German edition, there is also an edition in English.)

ILLUSTRATED THROUGHOUT with GORGEOUS FULL-COLOR PHOTOGRAPHS of Many of the Books Published by the Cranach Press.

Condition: FINE BOOK, sharp cornered, tight, bright, clean, clear and unmarked. In a GOOD slipcase which has shelf rubs and is scuffed at the spine, but is solid and doing its job well. Brilliant illustrations.

About the CRANACH PRESS (from various Internet sources):

******The Cranach Press was founded by Count Harry Graf Kessler (1868-1937) with the undertaking to print the finest possible editions of the world's greatest literature in new and important German translations. Kessler employed print-men and illustrators of outstanding ability and produced some of the world's most beautiful books.

In 1913 Kessler commissioned Edward Gordon Craig, an English theatrical designer and theoretician, to make woodcut illustrations for a sumptuous edition of Shakespeare's Hamlet for the Cranach Press. A German translation by Gerhart Hauptmann, with illustrations by Craig, was finally published in Weimar in 1928. The English version, edited by J. Dover Wilson, came out in 1930. This book, printed on fine paper, using different type-faces, with marginal notes with source quotations, and featuring Craig's woodcuts, is regarded by many as one of the finest examples of the printer's art to have been published in the 20th century.******