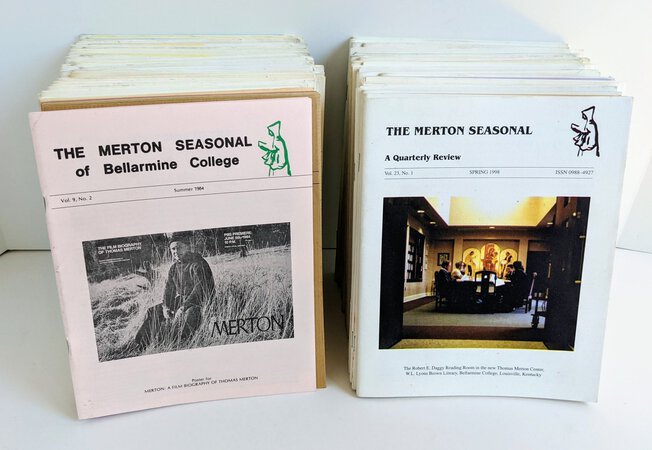 The issues are generally in VERY GOOD condition. There is a mailing label on the rear covers, a small stain to the covers here and there, overall tight, bright, clean, clear and unmarked.

About THOMAS MERTON (from Wikipedia):

******Thomas Merton OCSO, b.1915 d.1968, was an American Trappist monk, writer, theologian, mystic, poet, social activist and scholar of comparative religion. On May 26, 1949, he was ordained to the Catholic priesthood. He was a member of the Abbey of Our Lady of Gethsemani, near Bardstown, Kentucky, living there from 1941 to his death.

Merton wrote more than 50 books. Among Merton's most enduring works is his bestselling autobiography The Seven Storey Mountain (1948).

Merton became a keen proponent of interfaith understanding, exploring Eastern religions through his study of mystic practice. He is particularly known for having pioneered dialogue with prominent Asian spiritual figures, including the Dalai Lama; Japanese writer D. T. Suzuki; Thai Buddhist monk Buddhadasa, and Vietnamese monk Thich Nhat Hanh. He traveled extensively in the course of meeting with them and attending international conferences on religion. In addition, he wrote books on Zen Buddhism, Confucianism, and Taoism, and how Christianity related to them. This was highly unusual at the time in the United States, particularly within the Catholic religious orders.******

NTERNATIONAL BUYERS PLEASE NOTE: These 63 issues will require substantial additional shipping charges. After placing your order you will be notified of the additional charges and be able to accept or reject them before your payment is processed. Or you can contact us ahead of time to find out the shipping charge to your country. Thanks.