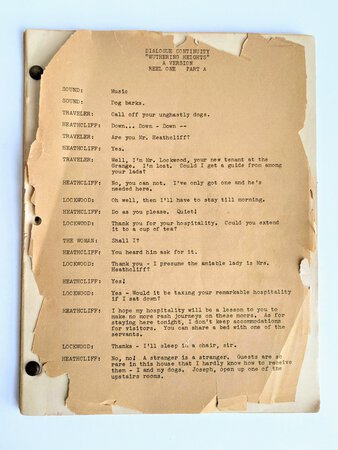 Original WUTHERING HEIGHTS CONTINUITY DIALOGUE SCREENPLAY / SCRIPT. Directed by William Wyler. Script by Ben Hecht, Charles MacArthur, and an uncredited John Huston. Starring Laurence Olivier and Merle Oberon. The script is not dated and neither the writers, director or actors are credited on this script. However, the paper, the printing, and the six-reel transcription, and the Provenance, clearly identifies this as an original, 1939 continuity screenplay.

Provenance of Paul Kohner, with his early label "Paul Kohner, Inc." on the blank verso of the last page. Paul Kohner was an noted film producer in the 1930s. Among other films he produced William Wyler's "A House Divided" and Lon Chaney's "The Hunchback of Notre Dame". Paul Kohner later became a film industry super-agent. John Huston was his client and friend for over 40 years, William Wyler and David Niven were also clients. All

were involved with Wuthering Heights, Wyler as Directory, Huston as an uncredited screenwriter, Niven as an actor. (See more about Paul Kohner at the end of this listing.)

Mimeographed pages printed on one side only, 8.5x11 inches, 47 pages, 3-hole punched at the left margin, bound with two brass brads.

The dialogue continuity is transcribed by reel. There are six reels, each with a Part A and Part B, except for Reel Six which only needs Part A to reach the end of the film. The dialogue continuity (and the 1939 film) ends with the classic: "No, not dead, Dr. Kenneth. Not alone. He's with her. They've only just begun to live. Goodbye Heathcliff. Goodbye my wild sweet Cathy."

FAIR CONDITION: The first page is browned, not attached to the brads, and heavily chipped at all its edges, but the text is complete and fully legible; pages 2-47 are age toned, and some edge wear here and there including a few closed tears and small chips.

This is the only Original Wuthering Heights Six Reel Dialogue Continuity that I have ever seen, and I doubt I will ever see another.

******Continuities (Continuity Scripts) were an important part of the film industry in its early days. They were typically created after a film was "in the can", but before it was released, in order to create a written "copy" of the film. A good Continuity provided a transcription of every word of dialogue in the finished film, something that could obviously not be known until a film was completed. Continuities were created both for copyright protection and for a "true record" of a film. Many early films easily degenerated, and many others were wiped out to recover their silver. A true continuity script was therefore often the only archived, word-by-word, record of many early films.******

Paul Kohner was born in Teplice-Sanov in what was Czechoslovakia. In the 1920s Kohner came to the United States to work for Universal. He became head of Universal's European division in Berlin in the late 1920's.

He returned to the United States in the mid 1930's, and produced dozens of films, including Lon Chaney's "The Hunchback of Notre Dame," William Wyler's "A House Divided," "The Chinese Parrot" and "Love Me and the World Is Mine".

Ingmar Bergman once said that Paul Kohner's life "includes the history of the movies." And John Huston, a client for more than 40 years, said of Paul Kohner: "We lasted through marriages and wars and good times and disasters - nothing lasts forever except Paul and me."******