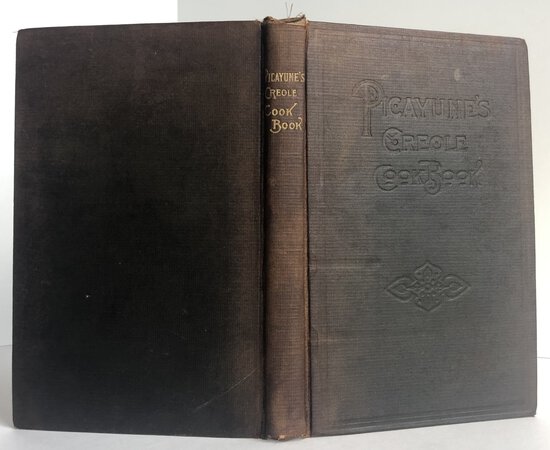 THE PICAYUNE'S CREOLE COOK BOOK. Published by The Picayune, New Orleans, Louisiana, 1910. Fourth Edition, so stated. Compiled and edited anonymously. Hardbound in cloth covered boards with blind stamping on the front cover and gilt printing on the spine, 9.5" x 6.25", 418 pages, Contents, Index, Illustrated with two b&w images, "A Creole Negro Cook (Tante Zoe, with Tureen of Gumbo Filé)" and "The Picayune Frog," and 3 pages of Publisher's ads at the rear including a b&w photograph of the Picayune Newspaper Building. GOOD CONDITION: the original covers are rubbed, have some edge and spine-end wear, and small areas of discoloration, otherwise the covers remain solid and the gilt on the spine fairly bright. Internally, a penned New Orleans former owner's signature and 1913 date on the ffep, the front hinge has an old, neat tape repair, there are some droplet stains, age-toning and smudging here and there throughout, light shorelining to some bottom outer corner-tips, off-setting on four pages from laid-in paper clippings, and the leaf containing pages 189/190 has a 1.5" x 1" outer bottom corner chip affecting a few sentences on both sides of the leaf, the rear hinge is split but holding, and a former owner has pasted an old brown paper envelope to the rear pastedown that contains some old recipes, overall the inner pages are tight, bright, clean and unmarked. A respectable copy of this landmark New Orleans Cookbook which is a significant piece of national culinary history and a desirable cultural artifact.

Comprehensive chapters of recipes begin with Creole Coffee and continue with soups, fish and seafood, meats and game, birds and poultry, stuffings and dressings, sauces, salads, eggs, rice and cereals, cheese, vegetables, sweet entremets (side dishes), and desserts (including pastries, pies, puddings, cakes, and ice creams). Additional chapters provide recipes for preserves and fruit syrups, wines and beverages (Wormwood Ratafia!), candies, canning and pickling, and breads and rolls. Concluding chapters give tips and instructions for housekeepers, descriptions of seasonal foods found in local markets, and suggested menus for weekdays and special occasions. The last chapter is "How the Creole Housewife in Reduced Circumstances Manages to Live Economically and Well."

Emphasizing the rich mix of cultures that contributed to New Orleans cookery The Picayune's Creole Cook Book remains a compendium of food customs, race relations, religious observations, and festivals to all cooks, past, present and future.