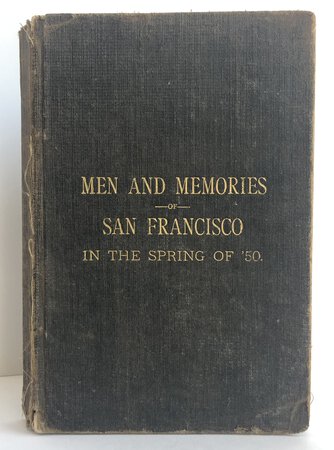 MEN AND MEMORIES OF SAN FRANCISCO IN THE SPRING OF '50 by T.A. Barry and B.A. Patten.

One of the classic works on San Francisco during the Gold Rush, containing first hand accounts and profiles collected by two leading saloon keepers of the 1850s. Presents a detailed picture of the City as it existed a few months before California statehood. They describe the streets and the residences and business that lined each thoroughfare and alley as well as the men and startlingly few women who owned those homes, boarding houses, hotels, restaurants, saloons, stores, offices, shops, and the Chinese laundry. They also chronicle the fire of May 1851 which destroyed so many of the structures they describe. While they focus on the city as it was in early 1850, their sketches of its residents extend further, providing richer accounts of their subjects. An iconic work that details San Francisco during its mythic period of explosive transformation long before the 1906 earthquake and fire reset the narrative.

GOOD Condition: covers and spine are lightly rubbed/frayed, tearing at the spine folds, rear board has vertical crack and old tape repair on inside cover, front board has chipped bottom corner with no cloth loss, a light color stain to the top margin of the rear cover, spots of foxing to the page edges (edges of the closed book), overall the covers remain solid and the gilt bright. Internally, there is a penciled former owner's name on the blank ffep, hinges cracked but holding by the sewn binding, scattered foxing mostly to the front margins, rear blank free endpaper torn out (otherwise complete), and light wear from age and use, overall the inner pages are tight, bright, clean and unmarked. A very respectable copy of this 1873 first edition.

Theodore Augustus Barry (1825-1881) and Benjamin Ada Patten (1825-1877) Famous San Francisco Gold Rush Saloon Proprietors. Their saloon Barry & Patten was an important fixture in the early history of San Francisco. Founded in 1850 at the corner of Montgomery and Sacramento streets, next to the first office of Wells Fargo & Company, in the heart of the growing business district, they stayed in business until 1878, holding (for most of that 28 years) the title of fanciest saloon on the West Coast. San Francisco was built around its saloons. They were its meeting houses, its civic centers, its museums, reading rooms and concert halls. Barry and Patten are still known to later generations of San Franciscans for their illuminating book of recollections about the City in pioneer times.