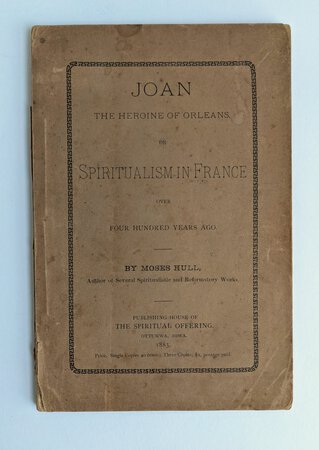 JOAN - THE HEROINE OF ORLEANS or SPIRITUALISM IN FRANCE OVER 400 YEARS AGO, by Moses Hull "Author of Several Spiritualistic and Reformatory Works".

Wrappers / Softcovers, 5.75x8.5 inches, 83 pages plus 5 pages of Ads for Spiritualist Books at the rear.

GOOD MINUS condition: the paper spine covering is mostly chipped off, and the front and rear covers have some stains, rubs and creases; internally, there is a small stain to the top edge of the first couple of pages, light toning, some foxing and age toning here and there, otherwise clean, clear and unmarked. A solid, complete, presentable copy.

A book on spiritualism in France in the age of Joan of Arc, how she lived in constant contact with spirits, and how her spiritualist life led her to greatness and should be an example to be followed by us all.

About the author, MOSES HULL (from Wikipedia):

******Moses Hull, b.1836 d.1907, was a minister for the Seventh-day Adventist Church in the 19th century, who later became a Spiritualist lecturer and author.

Born in Waldo, Ohio, Hull was a member of the United Brethren Church in his teens. He joined the Seventh-day Adventist Church in 1857, and became a prominent minister and debater for that denomination. In September 1863, Hull preached his last sermon as an Adventist minister.

Around this time, he turned most of energies towards the promotion of Spiritualism, specifically Christian Spiritualism, which saw spirit communication as the culmination of Christianity. He gained prominence in the movement for a series of debates with ministers, the outcome of which was evident in that the spiritualists rather than the ministers had the transcripts published. Hull became identified largely with Victoria Woodhull and the women's rights wing of the movement, which launched the Equal Rights Party campaign in 1872. He later married fellow spiritualist Mattie Brown Sawyer******