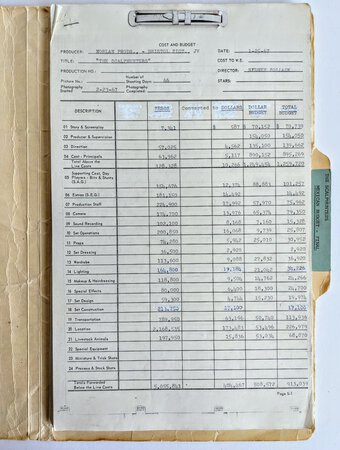 OSTS & BUDGET BREAKDOWN for the filming of THE SCALPHUNTERS in MEXICO. Includes all costs for an expected 66 day shoot in Mexico. The date of the budget breakdown is 1/25/67, with photography started on 2/23/67. The film was released by United Artists on 4/2/68, more than a year after this working budget.

The film was produced by Norlan Productions / Bristol Pictures. It was directed by Sydney Pollack, and starred Burt Lancaster.

Approximately 70 photocopied 8.5x14 inch pages, printed on one side only, 2-hole punched at the top, bound with a metal bracket, held in a manila folder. (Photocopying was, and often still is, how original copies of working budgets, with changes, were quickly produced and distributed to studios, producers, agents, directors, and others involved in a motion picture production.)

Every page has detailed information regarding the film's budget, including costs of extras, gaffers, stars, makeup and hairdressing, set designs, equipment, etc. etc. etc. This was truly a working budget, with white-out changes here and there throughout as cost estimates changed.

The budget pages are in VERY GOOD condition, lightly age toned, some signs of handling, and some white-out changes here and there (as noted above), otherwise the pages are bright, clean, clear and unmarked. The manila folder holding the budget breakdown has creases, wear, and some small stains.

A wonderful and intimate look at the breakdown of every cost involved in the production of a major motion picture in 1968.

About THE SCALPHUNTERS (from Wikipedia):

******The Scalphunters is a 1968 American Western film starring Burt Lancaster, Ossie Davis and Telly Savalas. The film was directed by Sydney Pollack, with the score written by Elmer Bernstein. Davis was nominated for a Golden Globe for Best Supporting Actor for his performance in the film. Filming took place in Sierra de Organos National Park in the town of Sombrerete, Mexico.******