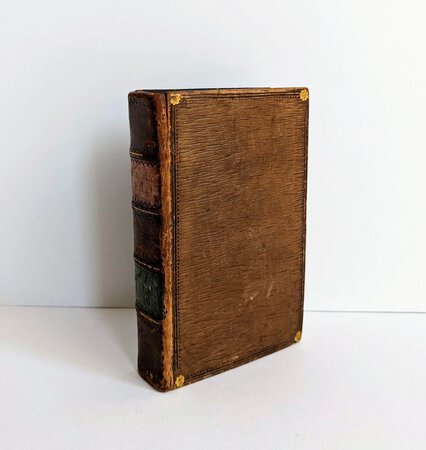 M. Tullius Cicero Orations XXIV - XXXV. (There are two title pages indicating this volume is composed of parts from Volume 3 of the Orations of Ciceronis, which was from Volume 7 of the complete Works of Ciceronis.) TEXT IN LATIN.

Previously owned by R. W. Hunt, with his ownership label on the front free endpaper: "from the library of / R. W. HUNT / Keeper of the Western MSS / Bodleian Library".

Also previously owned by Stephen Edward Spring Rice, b.1856 d.1902, with his armorial bookplate on the front pastedown.

GOOD condition: the rear spine fold is split, pulling away at the top 2 inches, but holding on with the cord binding, the front spine fold is split for 1 inch at the top at a bit at the bottom but still tight; the title labels are faded and rubbed but legible; internally, the front and rear hinges are cracked but holding well, there is some foxing and a bit of soiling here and there, overall the pages are tight, bright, clean and unmarked. A complete, presentable copy.

About R. W. HUNT (from Wikipedia):

******Richard William Hunt, b.1908 d.1979, was a scholar, grammarian, palaeographer, editor, and author of a number of books about medieval history. He began his career as a lecturer in palaeography at Liverpool University, and worked at Bush House during World War II. In 1945 he obtained the position of Keeper of the Western Manuscripts at the Bodleian Library, and he relocated to Oxford, remaining in the position until 1975.

On Hunt's retirement from the Bodleian in 1975, he was honored with an Oxford exhibition, The Survival of Ancient Literature. In 1980 he was posthumously honored with a second major exhibition, Manuscripts at Oxford.******

******Stephen Edward Spring Rice CB, b.1856 d.1902, was a British civil servant and academic. He was the son of the Hon. Charles William Thomas Spring Rice, a civil servant in the Foreign Office, and Elizabeth Margaret Marshall, the grandson of the Whig politician, Lord Monteagle of Brandon, the brother of the diplomat, Sir Cecil Spring Rice. He was brought up near Watermillock on the shore of Ullswater. He was invested as a Companion of the Order of the Bath (CB) and was a contributor to the Encyclopædia Britannica. He is commemorated by a memorial bridge at Aira Force.******