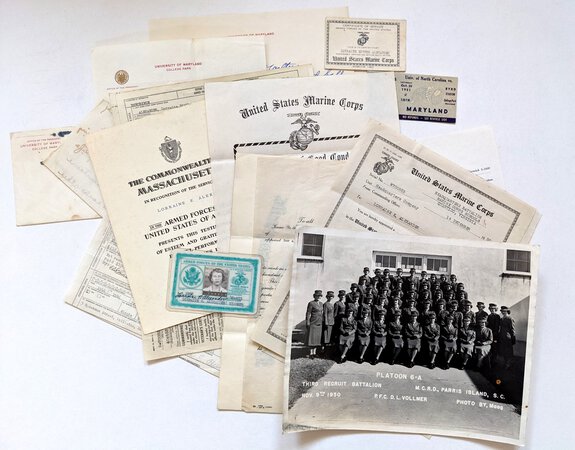 Archive of papers related to LORRAINE ALEXANDER, who in the early 1950s served in the U.S. MARINE CORPS, starting as a Private and rising to the rank of a Staff Sergeant.

CONDITION: Some creases, closed tears, folds, a bit of foxing, and other signs of age and handling, but everything remains solid, clean and clear.

About Women in the Marines during the Korean War (from the USMC website):

"In 1950, fewer than five years after World War II ended, the United States found itself once again confronted by a war for which it was unprepared. As before, a downsized military establishment rushed to call up, draft and recruit manpower, but recruitment numbers fell short of military requirements.

And just as in previous wars, the services turned again to American women, asking them to leave their homes, jobs and families to serve their country.

In March 1950, at the beginning of the Korean war, there were only 28 regular officer and 496 regular enlisted women Marines.By June 1950, the women Marines were authorized to comprise 100 officers, 10 warrant officers and 1,000 enlistees. Officers were trained at Marine Corps Base Quantico, Virginia, while enlisted women were trained at Marine Corps Recruit Depot Parris Island, South Carolina."