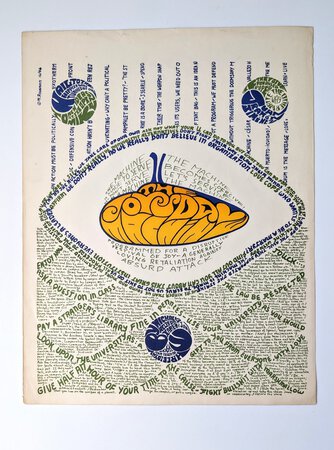 THE JOYSDAY MACHINE. A poster by Michael Rossman, aided by Karen and Jan, three loyal alumni who teach.

Title in psychedelic yellow letters in a submarine shape at the center, surrounded by psychedelically arranged calligraphy.

Full of 60s radicalism: "THE MACHINE IS MADE TO SERVE US - DON'T SERVE THE MACHINE", "HAIL TO THE HIPPIES THAT TURNED US ON TO NEW IDEAS AT THE OPEN MIKE", etc.

GOOD CONDITION. Lightly age toned. a bit of edgewear including a 1 inch closed tear and associated creasing at the top edge, overall still solid, bright, clean and clear. The poster will be shipped carefully rolled in a sturdy mailing tube.

About MICHAEL ROSSMAN (from his 2008 New York Times Obituary):

******Michael Rossman, b.1939 d.2008, was an organizer of the Free Speech Movement at the University of California, Berkeley, and later known for his books on politics, society and education.

Rossman was a graduate student in math at Berkeley when the Free Speech Movement burst into being on Oct. 1, 1964. He was among the hundreds of students who massed around a police car that day and the next to stop officers from taking away the civil rights organizer Jack Weinberg. (Mr. Weinberg had been arrested for violating a longstanding university ban on political advocacy on campus.)

A close friend of Mario Savio, the movement's best known leader, Mr. Rossman left graduate school in 1966 to devote himself to activism, lecturing on campuses around the country. He remained a community activist to the end of his life.******

Michael Rossman was also known to have amassed a large collection of social activism posters. This was one of the few he produced himself.