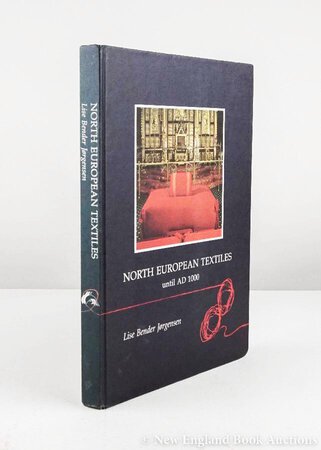 This is not a how-to book on weaving, but rather an important archeological study of how weaving and textiles developed in early Northern Europe. Filled with data and maps, the book catalogs over 1,200 archeological textile finds. It should be of great interest to any weaver interested in the history and development of weaving in Britain and other Northern European countries.

Previously owned by the noted American weaver and authority on ancient textiles, Ute Bargmann, with her lovely bookplate on the front pastedown illustrating a weaver at her loom.

GOOD condition, the covers are lightly bumped at the corner tips and have a bit of wear at the spine ends, but remain solid and bright; the page edges (page edges of the closed book) are foxed; internally there is a bookplate on the front pastedown as noted above, otherwise the pages are tight, bright, clean, clear and unmarked. A nice, presentable copy.

About the book North European Textiles Until Ad 1000 and its author Lisa Bender Jorgensen (from the back cover):

******This book argues that the first steps towards organized textile production in Northern Europe were taken more than 2,500 years ago, in the early Iron Age. Later, larger scale textile industries developed. One of these industries was centered around the English Channel and North Sea coastal areas; it played an important part in the rise of the Carolingian Empire and Anglo-Saxon England.

North European Textiles until AD 1000 catalogs around 1,200 textile finds in Great Britain, Ireland, The Netherlands, Germany, Poland and Finland, providing an extensive survey of a much neglected archaeological field.

LISE BENDER JØRGENSEN is a research fellow at the School of Conservation at the Royal Danish Academy of Fine Arts, Copenhagen. She has written several books on archaeological textiles, as well as books on the Renaissance fishing village of Sandhagen and on Denmark's oldest town, Ribe. She has excavated in Denmark and Egypt, and is a founding member of the North European Symposium of Archaeological Textiles (NESAT).******

About the previous owner, Ute Bargmann (from her online obituary):

******Ute H. von Zezschwitz Bargmann, 81 of Conway, Massachusetts, died on August 14, 2021. She grew up in Germany and studied at the Sprachen und Dolmetscher Institut in Munich where she graduated as a translator and interpreter. She moved with her husband to the United States in 1965. She developed a love of research, publishing, and early textiles while working as Head Clerk of Interlibrary Loan and Senior Special Collections Assistant at the University of Massachusetts, University Archives, Amherst, Massachusetts, where she worked until she retired.

Ute purchased her first loom of many in 1972 and from there became well known in the textile community for her depth of knowledge and creative approach to weaving. In 2016 she received The Distinguished Achievement Award from the Weavers Guild of Boston. She was a member of Weaver Guild of Springfield, Weavers Guild of Boston, and Weavers of Western Massachusetts. She also served on several boards of textile associations and museums. Her weavings have been shown at numerous exhibitions. Ute authored and contributed to numerous published works on weaving and early textiles.******