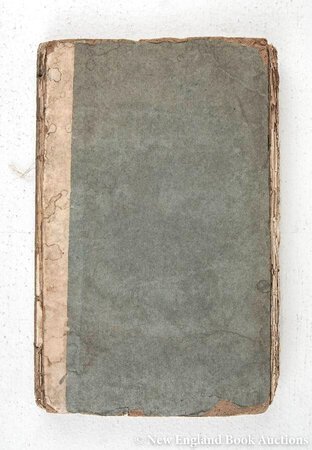 THE AMERICAN PRACTICAL BREWER AND TANNER: In Which is Exhibited the WHOLE PROCESS of BREWING WITHOUT BOILING... By JOSEPH COPPINGER, Practical Brewer.

NEW YORK: Printed by Van Winkle and Wiley, No. 3 Wall-Street, 1815. FIRST EDITION. This book is one of the earliest (possibly the first) American books on beer making.

CONDITION: The rear cover is disbound (present but laid on loosely), the front cover is hanging on by its sewn binding, the spine covering is lacking (i.e. the sewn binding and rear page edges are visible); the covers are soiled, have some shorelining, creases, chips and tears to the paper, etc; nonetheless the covers are original and present. Internally, there is foxing throughout, heaviest on the first and last few pages and a few other pages here and there, but otherwise rather mild; there is some shorelining to the bottom margin of the first few pages and to the upper area of the last few pages; one page has a closed tear across its face and another a 3 inch vertical tear starting at the bottom edge (neat tears, all text fully legible), and there are small tears, edge chips, edge wear, etc. here and there; otherwise the pages are bright, clean and clear, and the printing is sharp throughout.

JOSEPH COPPINGER initiated a correspondence with THOMAS JEFFERSON in 1802. In 1815 Coppinger sent Thomas Jefferson a letter and included a prospectus for the American Practical Brewer. Subsequently Thomas Jefferson wrote a number of letters to Coppinger inquiring about the book. The following is an extract from one of the 1815 Thomas Jefferson letters to Joseph Coppinger (published online by The National Archives):

"Monticello Apr. 25. 1815 // I am lately become a brewer for family use, having had the benefit of instruction to one of my people by an English brewer of the first order. I had noted the advertisement of your book in which the process of malting corn was promised & had engaged a bookseller to send it to me as soon as it should come out. We tried it here last fall with perfect success, and I shall use it principally hereafter. During the revolutionary war, the brewers on James river used Indian corn almost exclusively of all other. In my family brewing I have used wheat as we do not raise barley."

About JOSEPH COPPINGER (extracted from The Papers of Thomas Jefferson, Volume 38, published by Princeton, 2012; and the National Archives online):

*****Joseph Coppinger, emigrated from Harbour View, Ireland, to New York in 1802. He soon became a partner in the Point Brewery, Pittsburgh. In 1802 he initiated a correspondence with THOMAS JEFFERSON. In an "Address to the People of America" published in 1809, Coppinger praised Jefferson, calling him the "polar star," for his service to the country. In 1815, he wrote Thomas Jefferson soliciting support for the establishment of a national brewing company in Washington, D.C. and sent him a prospectus for a book he was writing entitled The American Practical Brewer and Tanner. Thomas Jefferson was very interested in the book and wrote to Coppinger repeatedly to inquire about the status of its publication.*****