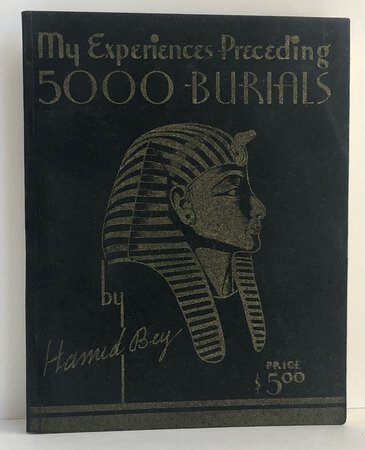 The 1933 apocryphal autobiography of "Egyptian" spiritualist Hamid Bey who claims he was born and raised in Cairo, and at an early age underwent training in an Egyptian Coptic Temple, ultimately emerging as a "Seven Ring Master." Bonham's auction house discovered the deception in 2012.

Published by The Ellicott Press, Buffalo, New York, 1933. Edited by Harriet Luella McCollum (Important woman leader of the New Thought Movement). First edition (as indicated by the lack of subsequent printings), original illustrated velveteen textured black and gold stiff paper wraps, 7" x 5.5", 138 pages, frontispiece portrait with patterned glassine guard, illustrated with two photographic portraits of Hamid Bey and a b&w drawing, with Publisher's bound in re-order coupon at the rear. VERY GOOD Condition: a touch of wear to the covers otherwise solid and bright, internally a former owners penned name and initials on the ffep, title page, and his initials on the endpapers, some creasing to the front margins (appears to be a production flaw), overall, tight, bright, clean and unmarked, an excellent copy. Scarce, only 3 found in OCLC collections worldwide.

In 1926 an Italian stage magician with an act styled after Harry Houdini traveled to New York City on the SS Leviathan. The eccentric theater promoter that hired him groomed him as an "Egyptian" named Hamid Bey who toured Vaudeville for years, skewering himself while standing on a bed of nails, being buried alive, and hypnotizing chickens. His Vaudeville performances were interspersed with joint appearances with the traveling Yogis Swami Paramahansa Yogananda (who later formed the Self-Realization Fellowship) and Brahmacharee Nerode (Sri Nerode), they lectured on self mastery and demonstrated yogic methods to control the material world through the mind. Yogi Hamid Bey demonstrated telepathy and hypnotism. Their metaphysical movement took off and by 1935 Bey was a financial success, moved to Hollywood, and was lecturing on mind over matter, cosmic polarization, hybridized esotericism, and doing spiritual demonstrations. He founded his own mystical religion, the Coptic Fellowship of America and gathered hundreds of Aquarian Age disciples.

Harriet Luella McCollum (1874-1948) editor, feminist, and psychologist. A teacher of practical psychology, she encouraged meditative concentration and relaxation, a practice that will "clean out the under-brush and debris of personality," provide "an abundance of energy," and enable one to attain whatever one desires and overcome chronic disease, which she said resulted primarily from "fear, an acute sense of injustice, grief, and regret."