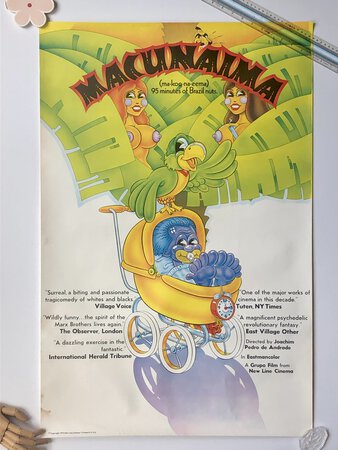 MACUNAIMA (1969). A Brazilian Cinema Novo masterpiece, considered one of the most important films in Brazilian history. Directed by Joaquim Pedro de Andrade, in Portuguese with English subtitles. A box office hit in Brazil, it was released in a dubbed version for American audiences in 1972 by New Line Cinema.

Illustrated by underground New York psychedelic comic artist Frank Mell. His incredible work is similar to legendary R. Crumb Comics, but much less known. His work is in the collection of the Oakland Museum, he illustrated psychedelic album covers, posters, and his work can be found in counter culture periodicals.

Original MOVIE POSTER, Offset lithograph on paper, 37" x 24.5". GOOD Condition: stored rolled for decades, so the colors remain very bright, the bottom margin has some waviness and shorelining/staining, the top edge has some light creasing, there are a few light smudges here and there and a few signs of wear, but overall the poster is solid, bright and clear.

An epic psychedelic adventure fantasy on Brazilian themes and myths, based on a Modernist novel written in 1928 by Mario de Andrade (no relation to the film's director), the metaphorical, savagely satirical film has drawn comparisons to the work of Fellini, John Waters and Lina Wertmuller. A revealing allegory of Brazil's complex racial and cultural history with subtle references to its repressive military rule. Like the musical style Tropicalia gave the world a uniquely Brazilian beat, Macunaima exhibits a strong Brazilian identity.

When the film was first released in the United States, its most sensational elements were played up. In a comprehensive 1976 essay about it in the media review journal Jump Cut, author J.R. Molotnik wrote that the movie had been dubbed "Jungle Freaks" for its U.S. release and was advertised in the Village Voice as "95 Minutes of Brazil Nuts." "New Line Cinema, the film's U.S. distributor, was clearly seeking to attract the Voice's avowedly offbeat readers with promises of an exotic spoof," Molotnik wrote. "The movie buff likely to attend such an 'underground' film was thus readied for a far-out lighthearted film, one bearing little resemblance to the 'heavy' classics of Latin American revolutionary cinema."

Will be shipped carefully rolled in a sturdy mailing tube.