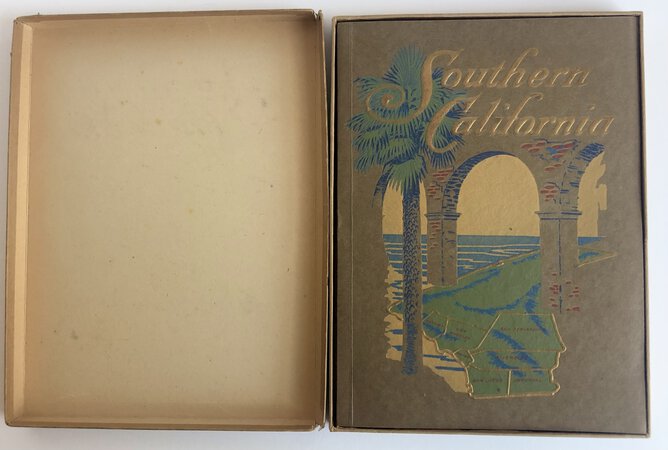 Original pictorial embossed stiff card wrappers, 10.5" x 7.5", still nestled into the original Publisher's brown cardboard box, 263 pages, each page printed within a decorative border, richly illustrated throughout with hundreds of historic b&w photographic images of these seven Southern California counties as they appeared prior to 1914. NEAR FINE Condition: just a touch of age otherwise tight, bright, clean and unmarked, stored in its original box for over a century. The box top has split at two corner seams and three of the corners have old clear tape reinforcement, the box bottom is excellent, overall solid, clean and bright. An excellent Southern California promotional artifact from 1914.

The Panama-California Exposition was a world's fair held in San Diego from March 1915 through December 1916 to commemorate the completion of the Panama Canal in South America. The Exposition was meant to promote San Diego as the first American port of call north of the Canal. The fair drew a large amount of attention and tourism to San Diego, helping re-establish the city's economy that had remained weak after the Wall Street Panic of 1907. The fair was held in San Diego's large urban Balboa Park.

The Panama-Pacific International Exposition was a world's fair held in San Francisco from February 20 to December 4, 1915. Officially the Expo celebrated the opening of the Panama Canal, but politically it was San Francisco's way of showing it had recovered from the catastrophic 1906 earthquake and fire.