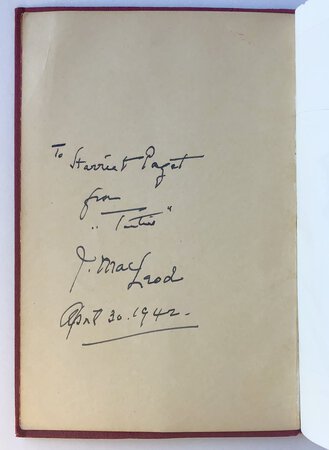 Rare Association Copy Signed and Inscribed by JOSEPHINE MacLEOD the lifelong friend and devotee of Swami Vivekananda who acknowledged Josephine as one of the most important people in his life. There are books written about her, many of her letters have been institutionally collected, but right now I can not find another example of a book that she has signed and inscribed.

MacLeod was known familiarly to Swami Vivekananda as Joe and as TANTINE in the Vedanta Movement.

INSPIRED TALKS, My Master and Other Writings by Swami Vivekananda. Published by Ramakrishna-Vivekananda Center of New York, Inc. 1934 first authorized pocket edition, textured red cloth covered flexible card covers with gilt printing on the front cover and spine, 6.25" x 4.15", marbled end-papers, top edge gilt, 301 pages, illustrated with a b&w frontispiece portrait of Swami Vivekananda, a few other photos. Page 299 in the Selected Letters section is printed a letter Swami Vivekananda wrote to Miss Josephine MacLeod. VERY GOOD Condition: some wear to the covers, mostly to the extremities, overall solid and bright, internally, there is a penned date on the title page, a few pages have light pencilled underlining, dedication page is un-cut, and some light wear from age and use, otherwise tight, bright and clean, and Josephine MacLeod's inscription is bold and bright. Scarce signed.

Josephine MacLeod (1858-1949) first heard Swami Vivekananda (1863-1902) speak at a lecture she attended with her sister Betty in New York in 1885. MacLeod was spellbound by his truth and was determined to follow him to India. She and her sister became Vivekananda's ardent supporters, her sister was married to Francis Leggett the millionaire head of a wholesale grocery firm, who became Vivekananda's legal adviser and the president of the Vedanta Society in New York. Josephine stayed with Swami longer than any of his Western followers. Long after his death, she remained - until her own death at the age of 90 at the Vedanta Hollywood Center - an unusually effective friend and international ambassador who raised funds, stimulated interest and perpetuated the influence of her dear friend and the Ramakrishna Vivekananda movement.

Swami Vivekananda (b. India 1863-1902) influential spiritual and religious leader, Hindu monk, philosopher, chief disciple of the Indian mystic Ramakrishna, key figure in popularizing the self improvement ethos of Vedanta and Yoga, founder in 1894 of the Vedanta Society of New York, and founder of the Ramakrishna Mission in India 1897.

About Josephine MacLeod (from Wikipedia):

"Josephine MacLeod (1858-1949) was an American friend and devotee of Swami Vivekananda. She had a strong attachment to India and was an active participant in the Ramakrishna Vivekananda movement. She was given the nicknames "Tantine" and "Jo Jo" by Vivekananda. She considered Swami Vivekananda to be her friend and helped him with his finances. MacLeod was not a sanyasin, unlike many others such as Sister Nivedita or Sister Christine. She was instrumental in spreading Vivekananda's message on Vedanta in the West. She made many contributions to the initial and the later phases of the development of the order of Ramakrishna and Vivekananda. She was a contributor to many causes espoused by Sister Nivedita, the most famous disciple of Vivekananda, including that of contributing financially towards the development of the Indian National Movement especially in Bengal and elsewhere in India.

MacLeod became a member of the Vedanta Society established by Vivekananda and pursued the study and practice of Vedanta. This interaction gave her a different perspective of living in "eternity". Vivekananda noted "I simply adore Joe (MacLeod) in her tact and quiet way. She is a feminine statesman or woman. She can wield a kingdom. I have seldom seen such ..."