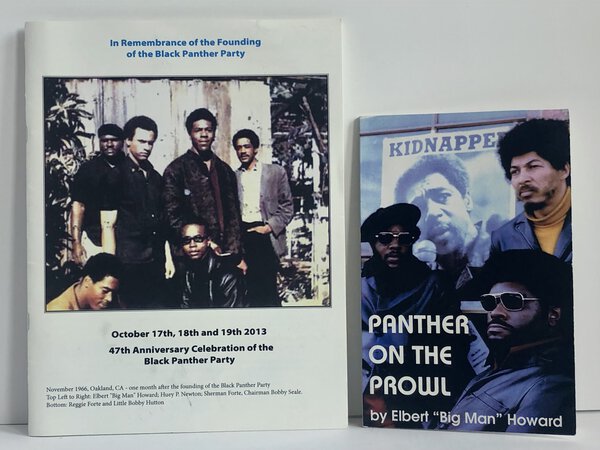 Black Panther Party 47th Anniversary Celebration : In Remembrance of the Founding of the Black Panther Party, held at the Arlene Francis Center in Santa Rosa, California. The full program took place October 17th-19th, 2013, and was organized by Elbert "Big Man" Howard, who speaks at the beginning of the event. Speakers scheduled to appear include BBP Co-Founder Bobby Seale. Illustrated softcover, side staple bound, 11" x 8.5", 36 pages including covers, illustrated throughout in color and black & white. VERY GOOD Condition: light wear to the covers, otherwise tight, bright, clean and unmarked and Howard's inscription is bold and bright.

Inscribed on the inside of the front cover: "Best of Everything on Thanksgiving / Nov 26, 2014 / Elbert Big Man Howard"

Inscribed on the title page: "Thanks for coming on Thanksgiving / Elbert Big Man Howard / Nov 26, 2014"

In 1966 Howard was one of the six original founding members of the Black Panther Party along with Bobby Seale, Huey P. Newton, Bobby Hutton, Reggie Forte and Sherman Forte. In Oakland, with a common interest in resistance to police abuse of African Americans, politics, Black history and social revolution the Black Panther Party for Self-Defense was formed. They had enough of police brutality committed with impunity on African Americans. "No results came of it, and no one came to the people's rescue," Howard said. He was a military veteran who helped teach fellow Black Panthers to handle guns and become armed revolutionaries. In and around Oakland in the latter half of the 1960s and first half of the 1970s, Howard took part in shadowing law enforcement officers to discourage them from abusing Blacks and others. He traveled the world as an emissary for the Black Panthers, it was later discovered he was followed and surveilled by the FBI. Howard left the Black Panthers in 1974 as it unraveled from internal conflict, deadly shootouts and disruption tactics by the FBI, whose director at the time, J. Edgar Hoover, called the Black Panthers "the single greatest threat to the internal security of the United States."