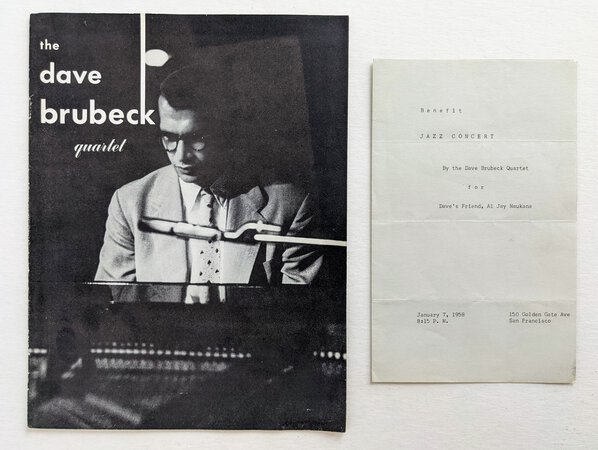 Joe Morello and Mort Lewis also INSCRIBED the booklet to JEAN (Jean Gundlach), who was on the Committee that arranged for the Benefit Concert (she is named at the bottom of the last page of the 4 page program pamphlet).

Also signed Lou Olvera, who was a beloved teacher at the East Contra Costa Junior College (now Diablo Valley College) and Jazz fan. Dave Brubeck once performed at ECCJC along with Cal Tjader.

The program consists of TWO ITEMS:

About JEAN (Gundlach), who was on the Committee to arrange the Benefit Concert, and to whom Joe Morello and Mort Lewis inscribed the program (from her 2010 Seattle Times obituary):

******Jean Gundlach, b.1914 d.2010, was a lifetime labor union activist. Beginning in the 1950s she served for 30 years as secretary to Harry Bridges in the ILWU in San Francisco. Throughout her years, Jean devoted herself to progressive programs, fighting against the McCarthy hearings, working with migrant farm worker organizations in the 1950s, joining many labor strikes and walkouts, etc. She was central to the creation of the Harry Bridges Chair and Center for Labor Studies at the University of Washington.******