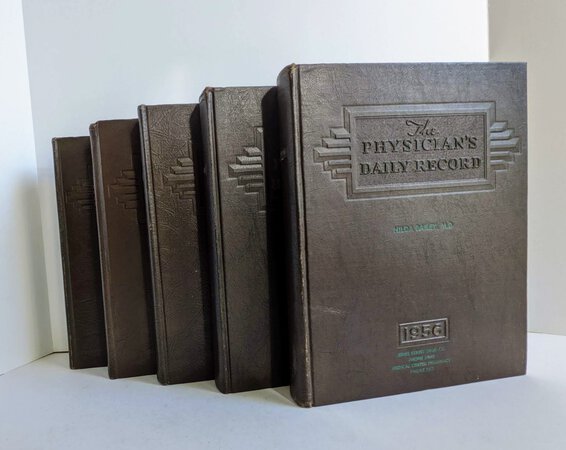 (1) FIVE LARGE VOLUMES RECORDING DAILY PATIENT VISITS for the years 1953, 1954, 1955, 1956 and 1958. The volumes are titled: THE PHYSICIAN'S DAILY RECORD and are stamped on the front cover with HILDA BAILEY, M.D. Each volume has 365 daily calendar sheets laid out for physicians, with columns for patient names, services rendered, and payment received. Dr. Hilda Bailey listed the full names of all the patients she saw, but only used a simple, usually single letter, code for services rendered. Presumably the patients were mainly children of Salisbury and Rowan County, North Carolina.

(2) An Appointment Book for the year 1960. Filled with the full names of patients, with the dates and times of their appointments.

(3) TWO NORTH CAROLINA POISON & EXEMPT NARCOTIC PREPARATION REGISTERS. One volume is for the year 1957 (and a couple months in late 1956), the other for the years 1961 and 1962. Filled with names/signatures of many people who bought various "exempt" narcotics, along with their address, the preparation purchased, who sold it, and the date sold.

Condition: The covers of the Narcotic Preparation Registers are soiled and marked, the covers of the five Physician Daily Record volumes have a few marks and scrapes, otherwise all the volumes are in generally solid, GOOD condition, with handwriting that is bright, clear and legible throughout. The tax returns are toned, soiled and worn at the edges.

About DR. HILDA BAILEY (from her Obituary):

Dr. Bailey entered the North Carolina university system and its medical school during a time when women students had very limited opportunities in Chapel Hill.

(Women in the 1940s encountered many barriers when trying to enter medical school. The average quota for women medical students in 1941 was 5 percent nationally. Women gained a foothold in medical schools during the early 1940s because World War II called men to service. The number of hospitals accepting women interns increased by 400% from 105 in 1941 to 463 at the end of 1942. As easily as the barriers were lowered during the war, they were once again raised after the war. In 1945, women physicians were removed from hospital staff to make room for returning male veterans. By the fall of 1946, a full page advertisement appeared in the New York Herald Tribune under the caption: "Doctors Wanted: No Women Need Apply." Nationally, the period from 1949 to approximately 1960 has been called the "era of hostility" for women in medicine.)

Dr. Bailey's dedication to children endeared her to Rowan County families and nursing staff. A hospitalized child received her tireless attention. She was sometimes seen rocking an unhappy hospitalized child, even if the child was not her patient. Every parent of her "children" has at least one Dr. Bailey story, some of them bordering on heroism.******

(You can read her full obituary online by searching "Dr. Hilda Bailey obituary".)

PLEASE NOTE: These EIGHT BOOKS weigh approximately 24 pounds packed for shipping. They will be well packed for safe shipping.