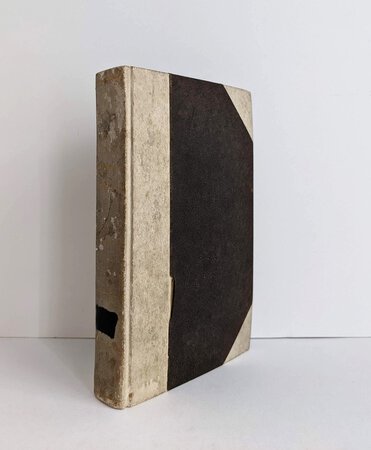 (Oriental and Occidental Master of Languages : which not only shows a hundred Alphabets together with their pronunciation, which are used by most European, Asian, African and American peoples and nations : but also some Polyglot Tables of different languages and numbers : and also the Lord's Prayer, as communicated in 200 languages and dialects with the same characters and reading, according to a geographical order...)

German language text on linguistics from the Enlightenment.

Compiled by Johann Friedrich Fritz with contributions by Benjamin Schultze.

Collated page by page with a copy held in the Bibliotheque Jesuite des Fontaines, Lyon, France.

Previously owned by JAMES LE BOUTILLIER, and donated by him to the Theological Seminary of Ohio, with his ink presentation, signature and date (1869) on the front free endpaper, and his almost completely faded heraldic bookplate on the front pastedown (with magnification his printed name is still visible at the bottom of the plate). James Le Boutillier was a prominent businessman in Cincinnati. He became renowned for his large heraldic book collection.

GOOD Condition: Ex-libris of the Diocese of Ohio with inked call number on spine, bookplate on the front pastedown, and some library marks here and there. The cover's have some wear and soiling to the vellum, and the spine gilt has mostly worn away, but are sturdy and doing their job well. Internally, there is a previous owner's inscription on the front free-endpaper, as noted above; the front and rear hinges are cracked but holding well; there is light shorelining mostly on the early pages, and some foxing here and there; overall a solid copy with pages that are tight, bright, clean, clear and fully legible throughout. Textually complete but with only 10 (of 38) tipped in plates. A nice, presentable copy.

RARE in its 1748 first edition state.

******Contains the Lord's prayer in some 200 languages, including 8 spoken in the Americas: Mexicana, Poconchica, Carabaica, Savanahica, Virginiana, [DJS: = Mass?], Mohogica, Karirica, Guarinica sive Brasilica (p. 124-127, fourth count). Author's name from Sabin, who gives credit for the compilation of the text to Johann Friedrich Fritz. The first part contains some contributions by Benjamin Schultze.******

About JAMES LE BOUTILLIER, a previous owner of the book (from his 1906 Obituary in the New York Observer):

******James Le Boutillier, who died on September 19, was the sole surviving member of the old firm of Le Boutillier Brothers, which founded dry goods houses in New York, Philadelphia and Cincinnati about sixty years ago. He was born on the Island of Guernsey in 1814, and came to New York in 1849, and after living in this city for four years, went to Cincinnati, Ohio, where he founded the Cincinnati branch of the firm He developed the Cincinnati house to great success and prominence. Mr. Le Boutillier built one of the finest and largest heraldic libraries in the United States.******