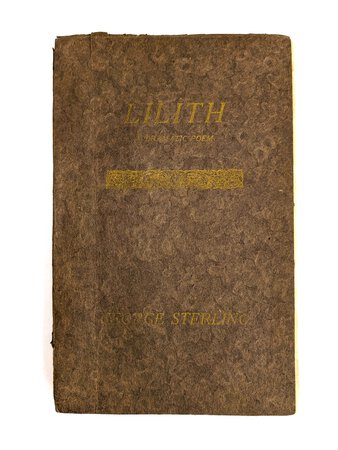 SIGNED and INSCRIBED by GEORGE STERLING on the front free-endpaper: "Dear Birdie, / Accept this book in memory of 'the good old days.' / Your friend / George / San Francisco, / Dec. 21st, 1919." (The question is, who is Birdie?)

GEORGE STERLING also SIGNED and NUMBERED the book on the Colophon / Limitation page (the last page).

FAIR CONDITION: The wrappers are chipped at the top of the spine and missing a 1.5 inch piece at the bottom of the spine, have a bit of edge wear, are tender at the front fold, and the covers have been glued on too widely to the text block at the spine margin (the front cover is glued on for 1 inch at the spine margin and the rear cover is glued on for 1.5 inches at the spine margin). Internally, the rear cover and its attached endpaper have opened too widely, exposing the staple binding, but are still attached; the inner pages have George Sterling's hand corrections here and there as noted above; all pages are lightly toned; there is a small bookseller's label on the inside rear cover "Books Inc. / 336 Sutter St. / San Francisco"; otherwise the inner pages are bright, clean and clear. Despite its flaws, a complete, presentable copy.

RARE, especially so with the WARM INSCRIPTION and TWO SIGNATURES of George Sterling.

About GEORGE STERLING (from Wikipedia):

******George Sterling, b.1869 d.1926, was an American writer based in the San Francisco, California, Bay Area. He was a prominent poet and playwright and proponent of Bohemianism in the early 20th century. His work was admired by writers as diverse as Jack London and Upton Sinclair. Sterling joined the Bohemian Club and acted in their theatrical productions each summer at the Bohemian Grove. For the Grove play of 1907 the Club presented Sterling's "The Triumph of Bohemia". Sterling carried a vial of cyanide for many years. In November 1926, Sterling used it while at his residence at the San Francisco Bohemian Club. Kevin Starr wrote that "When George Sterling's corpse was discovered in his room at the Bohemian Club... the golden age of San Francisco's bohemia had definitely come to a miserable end."******