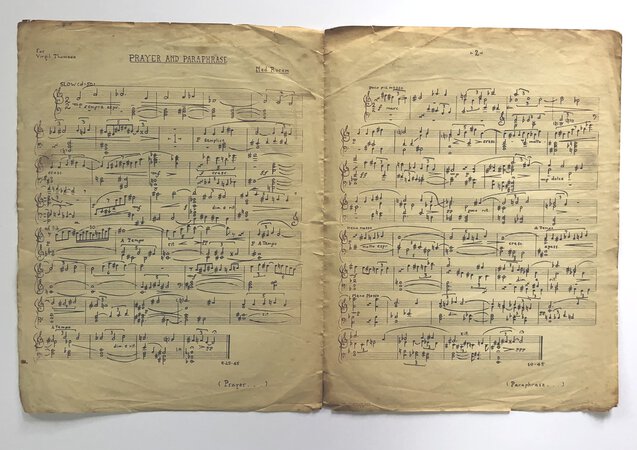 PRAYER AND PARAPHRASE for Virgil Thomson by NED ROREM

An important early composition by Ned Rorem. Only one other known copy, archived at Yale in the Virgil Thomson Papers.

GOOD CONDITION: The sheet is toned, lightly foxed, slightly fragile, the fold is tender and starting to split but holding, tiny tears and chips to edges, otherwise the piece is bright, unmarked, completely legible, and remains upright on a music stand.

Ned Rorem (born 1923) is an American composer and diarist. He won a Pulitzer Prize for Music in 1976 for his Air Music: Ten Etudes for Orchestra.

Virgil Thomson (1896 - 1989) was an American composer and critic. He was instrumental in the development of the "American Sound" in classical music. In 1949, he was awarded the Pulitzer Prize for Music for the score to the film Louisiana Story.