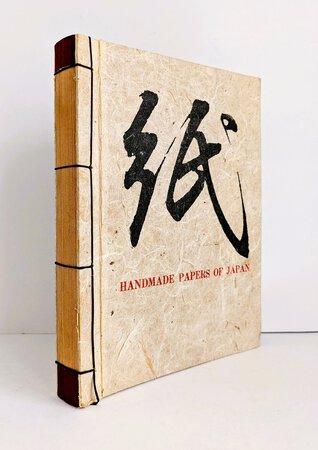 HANDMADE PAPERS OF JAPAN. A book/catalog of handmade papers by a Tokyo, Japan paper making company. The catalog includes an abridged facsimile of Kamisuki Chohoki's early, illustrated, Japanese book on Paper-Making by Hand.

Hardcovers, side-stitched, 128 pages including 108 pages with tipped-in paper samples, and 10 pages reprinting an abridgement of a Japanese illustrated classic about paper-making.

ASSOCIATION COPY, previously owned by the renowned paper restoration archivist GEORGE MARTIN CUNHA, with his bookplate is on the front pastedown. Additionally, LAID-IN is an unsigned typed carbon copy of a letter by George M. Cunha to Herbert Farrier. a VP at Andrews / Nelson / Whitehead (a fine-paper importing company), and a copy of Farrier's typed signed letter in response. The letters discuss Cunha's desire to "restore the rare and valuable volumes in the custody of this library [the Library of the Boston Athenaeum]". Farrier's letter is dated August 23 and refers to Cunha's letter dated August 15, but one or the other has the year wrong because Cunha's letter has the year as 1965 and Farrier's response has the year as 1963.

VERY GOOD condition, slight bumps to the cover corner tips, one paper sample has a crease and small tear to its bottom corner area, else tight, bright, clean and unmarked. All paper samples are present and amazing in their variety.

RARE First Edition, made especially so with the Association to George Martin Cunha.

About GEORGE MARTIN CUNHA (from his 1994 obituary):

******George M. Cunha, b.1911 d.1994, Director Emeritus and founder of the Northeast Document Conservation Center (NEDCC) in Andover, Massachusetts. Born in Providence, Rhode Island, and long-time resident of Topsfield, Massachusetts, he moved to Kentucky with his wife Dorothy Grant Cunha in 1980. Cunha was an international authority in the field of preservation of library and archival materials.

Cunha influenced a whole generation of people who now practice conservation and manage preservation programs in institutions in all parts of the country. His books are recognized as classics in the field and filled a vacuum at a time when there was no other literature on the subject of conservation of library materials.

A graduate of the Massachusetts Institute of Technology and the United States Naval War College, Captain Cunha was a combat pilot during World War II and was awarded the Distinguished Flying Cross. In 1963, after 26 years of service in the Navy as a pilot and underwater weapons specialist, he became Chief Conservator at the Library of the Boston Athenaeum. He spearheaded the creation of the New England Document Conservation Center (as it was then known) and became its first director in 1973. Captain Cunha was a Fellow of the American Institute for Conservation, the Royal Society of Arts (London), the Society of American Archivists, and the Pilgrim Society.******

******We are one of the country's oldest and most distinguished independent libraries, with a circulating collection of over half a million books...our special collections include active holdings of 100,000 rare books, maps and manuscripts.******