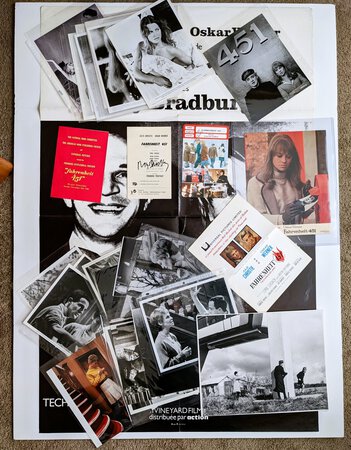 FAHRENHEIT 451, the 1966 Film Directed by FRANÇOIS TRUFFAUT based on the Novel by RAY BRADBURY. Archival collection of booklets, photographs, a poster, lobby card, and other ephemera - with Bradbury and Christie signatures.

**SIGNED BY RAY BRADBURY* - A promotional fold-open pamphlet printed for the release of the film. The pamphlet is accompanied with a COA from the original seller which includes a printed photograph of the seller and Ray Bradbury together at the signing.

**RARE ONE SHEET POSTER** - A rare French folded one sheet b&w film poster, 30 x 46 inches, featuring the image of Francois Truffaut and Julie Christie, and boldly displaying the name of Ray Bradbury, and even the cinematographer, Nicolas Roeg. I have never seen another copy of this particular poster.

**PHILIPPE HALSMAN PHOTOGRAPH** An original b&w photograph by PHILIPPE HALSMAN of Francois Truffaut directing Julie Christie and Oskar Werner in a Fahrenheit 451 scene. The photograph has Philippe Halsman's copyright stamp on the backside.

**U.S. PREMIERE INVITATION** - Announcement for the U.S. Premiere of FAHRENHEIT 451 that took place at the PLAZA THEATRE on Sunday, November 13th, 1966, the day before the film was released theatrically in the U.S. The Premiere was hosted by "The National Book Committee", "The American Book Publishers Council", and "Universal Pictures". Single-fold sheet to make 4 pages, covers printed in red and yellow, inner pages printed in red on a cream-colored background.

**3 PHOTOGRAPHS from Fahrenheit 451** - Three 8x10 photographs from the film Fahrenheit 451, two in b&w, one in color. Great photo of Truffaut talking up close with Julie Christie, a lovely color photo of Christie, and a photo of Oskar Werner.

**7 PHOTOGRAPHS of JULIE CHRISTIE** - Seven 8x10 b&w photographs of Julie Christie, most of her in various films other than Fahrenheit 451. Some have her name written on the backside (not her signature), a couple with a bit of information about the photo including the photographer's name. Included are film stills from Petulia and Demon Seed. Also included is a photo of Christie at home with her landlady. This photograph is accompanied with a handwritten note from the photo's previous owner that says he believes the photograph was made from an original negative.

CONDITION: Everything is generally in VERY GOOD condition, just mildly used - the photos are solid and bright, the signatures of Bradbury and Christie are bold, the Pinewood Studios promo sheet is folded else sharp and presentable, the rare one-sheet film poster has folds as normal but is brilliant.

With the unusual FILM POSTER, the SIGNED BRADBURY Film Release Pamphlet, the SIGNED JULIE CHRISTIE Film Flyer, the LOBBY CARD, the HALSMAN photograph, the 21 8x10 photographs, and more, this is quite a UNIQUE and RARE gathering. Some items I have never seen before.

****Fahrenheit 451 is a 1966 British dystopian drama film directed by François Truffaut and starring Julie Christie and Oskar Werner. Based on the 1953 novel by Ray Bradbury, the film takes place in a controlled society in an oppressive future.****