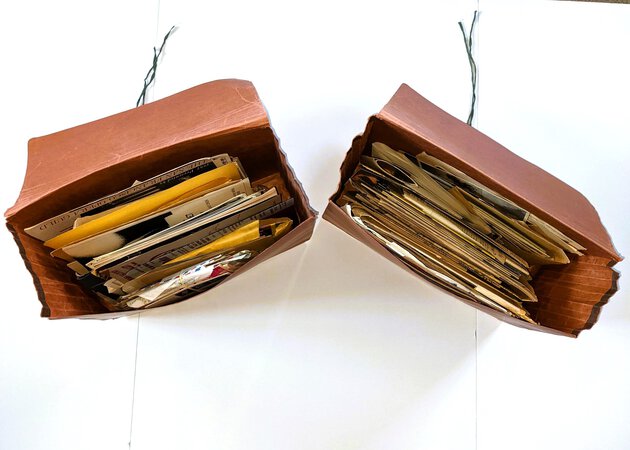 1951-1959 ARCHIVE of BARBARA ADAMS (aka BARBARA JOHNSTON, BARBARA J. ADAMS), a Ballerina in the San Francisco Ballet. She went on several world tours with the SF Ballet Company.

Consists of two expanding folders with tie closures STUFFED with 100s of letters, programs, photographs, announcements, snapshots, etc. Handwritten on the outside of one folder is: "S.F. BALLET 1951-1957" and on the other: "MIDDLE EAST TOUR - SPRING 1959".

In the 1950s Barbara Adams was a ballerina with the S.F. Ballet. She performed with Nancy Johnson and other Prima Ballerinas. There are programs, photographs, letters, documents, and all sorts of other ephemera related to her years with the Ballet.

Barbara Adams went on three world tours with the SF Ballet. In 1959 the S.F. Ballet went on a "Middle East Tour". There are programs, snapshots, letters, documents, and all sorts of other ephemera related to these tours in the "Tour" folder.

There is also a large group of letters from Turkey, Greece, Paris, Lebanon, and elsewhere, written while she was on tour with the Ballet. The letters are written to her mother, HAZEL M. JOHNSTON.

Everything is in generally GOOD condition, lightly used, handled and aged. Nice.

A wonderful and intimate look at the San Francisco Ballet in its early years, and during its early world tours, seen mainly through the eyes of Barbara Adams, Ballerina. I leave it to you to really dig through, discover and enjoy.

1957 - The Company makes its international debut with an 11 nation tour to Asia and the Middle East sponsored by the U.S. Department of State as an effort to present American culture around the world. The tour is so successful that it is followed by a four month tour of Latin America in 1958, and a three month tour of the Middle East in 1959.

1958 - To celebrate the Company's 25th anniversary, Lew Christensen creates Beauty and the Beast, his second full-length ballet for San Francisco Ballet, which becomes one of the most popular works over the next decade.