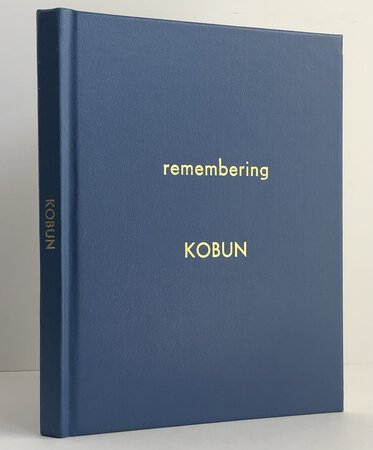 Kobun Chino Otogawa Roshi (1938-2002) Zen Master in the Soto Zen Buddhist Tradition. He came to California in the late 1960s to help Shunryu Suzuki Roshi, founder of the San Francisco Zen Center, establish Tassajara near Big Sur, the first Zen monastery in the United States. He later became the resident teacher at a Zen center in Los Altos, where in the 1970s he met Steve Jobs becoming his Guru and the Spiritual Director for NeXT Computer Company, Kobun conducted Jobs wedding ceremony to Laurene Powell in 1991. Kobun founded Jikoji, a Zen Temple in the Santa Cruz Mountains and Hokoji in New Mexico. He taught Buddhism at Stanford and Naropa University, he was also a Calligrapher, Painter, Archer, Flute Player, Poet and an excellent cook. He died in 2002 while trying to save his five year old daughter, Maya, who had fallen into a pond in Switzerland. Both drowned.

Published by Vanja Palmers, n.p., 2012. First edition. Hardbound in blue cloth with gilt printing on the front cover and spine, 9.25" x 7.25", 199 pages. Printed on the occasion of the 10th anniversary of his death (Paranirvana) as a tribute to his legacy. This beautifully produced memorial includes an autobiography and a biography of Kobun, transcripts of his lectures, some of his artworks, remembrances from students, friends, and family members, color photographs, and selected texts from Kobun's teachings. NEAR FINE Condition: tight, bright, clean and unmarked. A lovely copy. Scarce, no 2012 first editions held in OCLC collections worldwide, there is one holding of the 2016 second enlarged edition at the Allen Ginsberg Library in Naropa University.