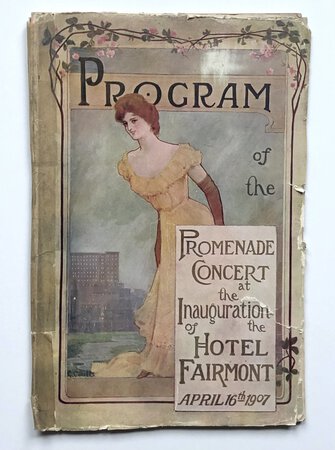 On April 16th 1907, less than one year after the devastating San Francisco earthquake and fire, the Fairmont Hotel (after an extensive renovation by California's first female licensed architect and engineering expert Julia Morgan) opened with a society benefit concert for several local charities. The Fairmont Hotel was named after mining magnate and U.S. Senator James Graham Fair by his daughters, Theresa Fair Oelrichs and Virginia Fair Vanderbilt, who built the hotel, atop Nob Hill, in his honor. Initially scheduled to open on April 18, 1906, mother nature had other plans .

PROGRAM OF THE PROMENADE CONCERT AT THE INAUGURATION OF THE HOTEL FAIRMONT APRIL 16TH 1907.

Published by the Press of Levison Printing Co., San Francisco, 1907. First and only printing, illustrated wraps, side staple bound, 10.25" x 6.75", 70 un-numbered pages including covers, filled throughout with advertisements, some illustrated, some in red and blue ink, and commentary from hundreds of local businesses that survived the 1906 earthquake. ACCEPTABLE Condition: covers are disbound, 2" edge tear and quarter size area of rubbing to front cover, chipped at the edges, old clear tape repair to spine, rear cover torn through and old clear tape repaired, overall the covers remain quite bright and legible, internally, some small stains, foxing, and waviness here and there throughout, staples oxidized but holding well, overall the pages are clear, bright and unmarked. Scarce, I have not found another copy in collection anywhere.

****About the Fairmont Hotel Inauguration Promenade Concert from the April 13 and 20, 1907 editions of THE WASP, a weekly journal published in San Francisco:

"All the arrangements for the Promenade Concert at the Fairmont Hotel next Tuesday evening, under the direction of Dr. H. J. Stewart, are complete, and the event will beyond question be the greatest charitable affair given up to this date in San Francisco. It is no exaggeration to say that all the ladies of influence in San Francisco are working for it and many of them have had a wide experience in arranging such affairs so as to insure success. Society en masse will attend this great concert, which is for the benefit of the San Francisco Nursery for Homeless Children, The Doctors' Daughters, and the San Francisco Polyclinic. Among those taking part in the musical program will be the Stanford and Berkeley Glee Clubs, the De Koven Glee Club, the Swedish Singing Society, the Fairmont Hotel Orchestra, Mrs. Birmingham, Miss Helen Heath, Miss Camille Frank, Mrs. Charles Camm, Mr. Marc, Miss Virginia Pierce, and Mr. Romeo Frick. The arrangements for the concert have been made by a joint committee of ladies from the three charities interested, of which Mrs. H. de Young is the head."

"No hotel could have had a more auspicious opening and the Hotel Fairmont management cannot complain that the inaugural night was not in every respect one that should give Messrs. Law and their able staff the utmost satisfaction. The board of managers, of which Mrs. M. H. de Young was chairman, announces that the financial returns from the promenade charity concert at the Fairmont Hotel ."

"The great promenade concert with which the Fairmont Hotel was opened not only came up to the highest expectations of the enthusiastic promoters but exceeded them. The ladies who got up the affair for the benefit of several most deserving charities are entitled to the highest praise. The affair netted nearly $25,000 for charity. The donations alone amounted to $10,000, and $8,000 were taken in for the sale of admission tickets. The raffle for the splendid Winton automobile, which was won by David Rich, the well-known real estate man, contributed $4500 to the grand total."