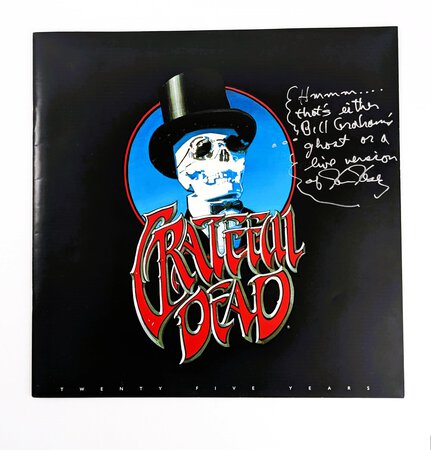 SIGNED & INSCRIBED in SILVER on the FRONT COVER by KEN KESEY, Friend, Mentor and LSD Guru to the Grateful Dead:

SIGNED & INSCRIBED in GOLD on the first two page panel by KEN BABBS, an LSD laden Merry Prankster and friend of the Grateful Dead and Ken Kesey:

Softcovers, side stapled, 11.75x11.75 inches (the shape of a vinyl album cover), 26 pages. illustrated with photographs of the band and its Dead members.

RARE SIGNED & INSCRIBED ASSOCIATION COPY that combines the GHOST of BILL GRAHAM, with the MERRY PRANKSTER MISCHIEVOUS WIT of KEN KESEY, and the LSD mindset of Prankster and Dead Friend KEN BABBS.

A Unique Item from the Pranksters and the Dead.

About KEN KESEY (excerpts from Wikipedia):

******Ken Kesey, b.1935 d.2001, One Flew Over The Cuckoo's Nest, Sometimes a Great Notion, Merry Pranksters, Acid Tests, Grateful Dead... After One Flew Over the Cuckoo's Nest was published, Kesey began hosting happenings with former colleagues, miscellaneous bohemian and literary figures, and other friends (Ken Babbs et al), collectively known as the MERRY PRANKSTERS; these parties, known as ACID TESTS, integrated the consumption of LSD with multimedia performances. KESEY MENTORED THE GRATEFUL DEAD (THE ACID TESTS' HOUSE BAND) throughout their early years and continued to exert a profound influence upon the group throughout their career.******

About KEN BABBS (from Wikipedia):

******Ken Babbs, b.1936, is a famous Merry Prankster who became one of the psychedelic leaders of the 1960s. He, along with best friend and Prankster leader Ken Kesey, wrote the book Last Go Round. Babbs is best known for his participation in the Acid Tests and on the bus Further. He and Ken Kesey said The Acid Tests were conceived when the Pranksters met the Grateful Dead.******

About BILL GRAHAM (from Wikipedia):

******Bill Graham, b.1931 d,1991, was a German-American rock concert promoter from the 1960s until his death in 1991 in a helicopter crash. On July 4, 1939, he was sent from Germany to France due to political uncertainty in his home country. At age 10, he settled into a foster home in the Bronx, New York. In the early 1960s, Graham moved to San Francisco, and in 1965, began to manage the San Francisco Mime Troupe which eventually led to his becoming one of the world's greatest Rock Concert Promoters. His promoted concerts at the Fillmore and Winterland Ballrooms made such bands as the Grateful Dead, Jefferson Airplane, and Big Brother and the Holding Company with Janis Joplin, world famous. The San Francisco Civic Auditorium was renamed The Bill Graham Civic Auditorium in his honor.******