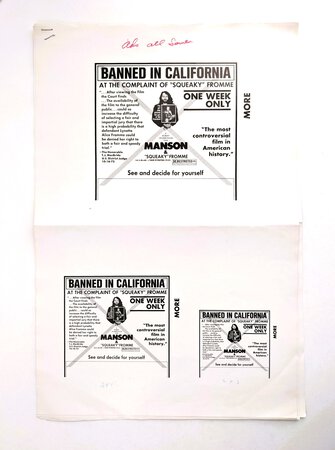 MANSON, is a 1973 Robert Hendrickson and Laurence Merrick documentary film about Charles Manson and his "Family" compiled from interviews with the cult members and featuring documentary footage of Charles Manson, Lynette 'Squeaky' Fromme, Leslie Van Houten, Tex Watson, Robert Beausoleil, and Bruce Davis. The film was nominated for an Academy Award for Best Documentary.

There were many people in the U.S., and particularly in California where the murders occurred, who did not want this movie released, and it had a very limited release in 1973.

In 1975, the movie was re-released to capitalize on the then notoriety of Lynette "Squeaky" Fromme, who had tried to assassinate President Gerald Ford, and she was prominently pictured on the re-release press with the tagline "The girl who pointed the gun at the President". The distributor also printed the words "BANNED IN CALIFORNIA" on the top of the press items, due to a U.S. District Court Order banning the film in order to "preserve Fromme's constitutional right to a fair and speedy trial."

This pressbook is quite unusual because all the press items say "ONE WEEK ONLY", and a few state "BANNED IN SACRAMENTO" instead of "BANNED IN CALIFORNIA". Why "One Week Only"? Perhaps after one week the ban was going to go into effect.

Paper pressbook, all with the same press ads, though a few state "Banned in Sacramento" as noted above; five 12x18 inch pages, each page with 3 identical ads for the film, stapled at the upper left corner. The film was rarely exhibited.

GOOD condition: A previous owner has written "ads all same" at the top of page 1, and "pre-opening" with hand drawn arrows pointing to ads on pages 3, 4 and 5; otherwise just lightly handled, still bright and clear with no cut-outs.

RARE, I have never seen another copy of this particular film pressbook / press sheets.