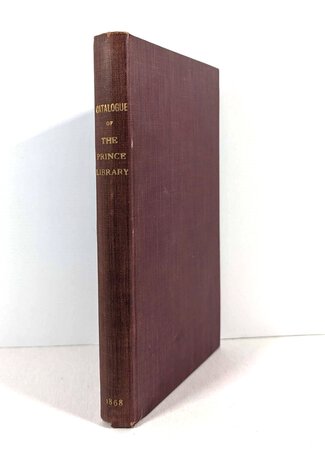 CATALOG of the AMERICAN PORTION of the LIBRARY of REV. THOMAS PRINCE Boston 1868

CATALOGUE of the BOOKS belonging to THE LOGANIAN LIBRARY: To Which is Prefixed a Short Account of the Institution, with the Law for Annexing the Said Library to that Belonging to THE LIBRARY COMPANY OF PHILADELPHIA and the Rules Regulating the Manner of Conducting the Same.

FAIR MINUS condition. The book is suitable for and needs rebinding. The covers are disbound but present, as noted above; there is an old bookplate of "Dr. Ball / Philadelphia" on the front pastedown; the covers are rubbed, soiled, have shorelining, are worn at the corners and edges, and have tears to the top 1.5 inches and the bottom inch of the spine; the spine title label is chipped and faded but legible. Internally, the spine is split at several places and could easily be spit at many more, signatures are ready to come loose, a good tug would pull the book into sections; lacking the frontispiece as noted above otherwise textually complete; there is light foxing throughout with more significant foxing on the first and last 10 or so pages; there is shorelining to the front margin of the early and latter pages, to the top and bottom margins of most pages, and here and there throughout; a previous owner wrote what appears to be a shelving number next to each cataloged item on the first 30 pages (all the A listings and some of the B listings).

This First Edition of an Important Library is worthy of rebinding.

About JAMES LOGAN (from Wikipedia):

******James Logan, b.1674 d.1751, was a Scots-Irish colonial American statesman, administrator, and scholar who served as the fourteenth mayor of Philadelphia and held a number of other public offices...He served as colonial secretary to William Penn. He was a founding trustee of the College of Philadelphia, the predecessor of the University of Pennsylvania.

While Logan would eventually become mayor of Philadelphia, chief justice of the Pennsylvania Supreme Court, lieutenant governor, and acting governor he is perhaps best known for being a bibliophile, confessing once that "Books are my disease". He collected a personal library of over 3,000 volumes. Some commentators consider Logan's library to have been the largest and best collection of classical writings in America at that time.******

About LIBRARY COMPANY OF PHILADELPHIA and the LOGANIAN LIBRARY (from Wikipedia):

In 1792 the Loganian Library, which had been housed across the square, was transferred to the Library Company, complementing its collection with the 2600 books (chiefly in Latin and Greek) that had been collected by James Logan.******