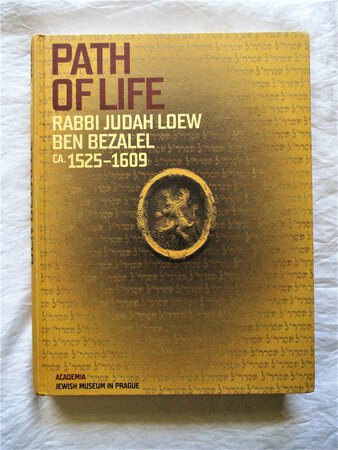 Alexandr Putik, editor and curator of the exhibition

PATH OF LIFE : RABBI JUDAH LOEW BEN BEZALEL 1525-1609. Large, beautifully produced, fully illustrated CATALOGUE for the Exhibition of the same name that took place at the PRAGUE CASTLE, Czech Republic, in 2009. The exhibition was conceived by Alexandr Putik, who also edited this deluxe catalog. English edition, translated from the Czech.

NEAR FINE condition, a slight bit of rubbing to the corner tips and spine ends, overall looks and feels unread, tight, bright, clean, clear and unmarked. A solid, lovely copy.

******The 7th of September 2009 was the 400th anniversary of the death of Judah Loew ben Bezalel, known both as the Maharal and Rabbi Loew. This exquisite book was published by the Jewish Museum in Prague and the Academia Publishing House for a prestigious exhibition of the same name at Prague Castle. It features a substantial selection of the exhibited items from the museum's collections and from numerous other Czech and foreign cultural institutions. However, it is more than a mere catalogue for the exhibition, as it PROVIDES INSIGHTS into the AUTHENTIC LEGACY of the MAHARAL, WHICH FOR THE MOST PART HAS UNTIL NOW REMAINED CONCEALED.

******Judah Loew ben Bezalel, b.1512-1526 d.1609, also called Rabbi Loew (aka Löw, Loewe, Löwe or Levai), widely known to scholars of Judaism as the Maharal of Prague or simply The Maharal, was an important Talmudic scholar, Jewish mystic, and philosopher who, for most of his life, served as the leading rabbi in the cities of Mikulov in Moravia and Prague in Bohemia.

Within the world of Torah and Talmudic scholarship, Loew is known for his works on Jewish philosophy and Jewish mysticism and his work Gur Aryeh al HaTorah, a supercommentary on Rashi's Torah commentary. He is also the subject of a 19th century legend that he created the Golem of Prague, an animate being fashioned from clay.

Maharal's numerous philosophical works have become cornerstones of Jewish thought. His writings tried to make the ideas of the Kabbalah (which he held to be the most deeply true of all the Torah) understandable to the average educated reader, by presenting them in a rigorously philosophical form, couched in terms accessible to the public. He felt that only the greatest of Torah scholars are able to perceive the full intent of the Kabbalistic works in their complex entirety, but much could be comprehended by the general reader if presented in a rational and philosophic form. His main kabbalistic influences appear to have been the Zohar, Sefer Yetzirah, and traditions of the Chassidei Ashkenaz.

Miharal was in favor of scientific research, but believed the Talmudic, Midrashic, and Aggadic teachings refer to matters far beyond the sphere of natural science.

The Maharal is the subject of the legend about the creation of a golem, a creature made out of clay to defend the Jews of the Prague Ghetto from antisemitic attacks. He is said to have used mystical powers based on esoteric knowledge of how God created Adam.

Rabbi Loew is buried at the Old Jewish Cemetery, Prague in Josefov, where his grave and tombstone can still be visited.******

INTERNATIONAL BIDDERS PLEASE NOTE: This book is heavy and will require additional shipping charges. After placing your order you will be notified of the charges and be able to accept or reject them before payment is taken. Thanks!