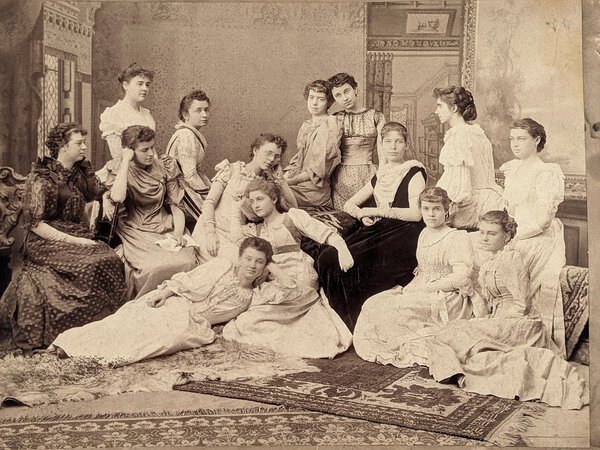 The photographic image is 9.75 x 12.75 inches, mounted on a 11x13.75 inch stiff card mount. Fourteen women are in the photograph, eight of them are named on the backside of the mount. The mount has two holes at the top and one on the bottom, perhaps for hanging with a cord. Printed on the bottom left side is: "G. Waldon Smith", and on the bottom right side is: "Boston, Portland & Old Orchard".

The image is in VERY GOOD condition, some light shorelining to the upper left corner area, overall bright and clear, lovely. The mount is GOOD, with wear at its corners and edges. The mount is slightly bowed.

A previous owner wrote on the backside in pencil "Smith College / circa 1888", but the only woman that I investigated who had a degree mentioned was "Clara Elise von Wettberg" who graduated from Wellesley in 1879. Maybe she then went to Smith College? A couple of the other women whose names I looked into indicated that the date "circa 1888" is probably correct. "Jessie Estelle Kline" was born in 1870 and was married in 1900. Frances Marie Barker married Harvard graduate Hugh Means in 1901, they both were from and returned to Lawrence, Kansas. Miss Margaret Dale Harrison of Philadelphia was listed in the 1898 Philadelphia Blue Book, and she was married in 1899. I could not find another college mentioned, but then again these women had very little mentioned online that I could find, other than the MEN they married. Hmmm.

Whether Smith College or Wellesley, this c.1888 photograph of 14 well heeled college girls is quite a treasure.