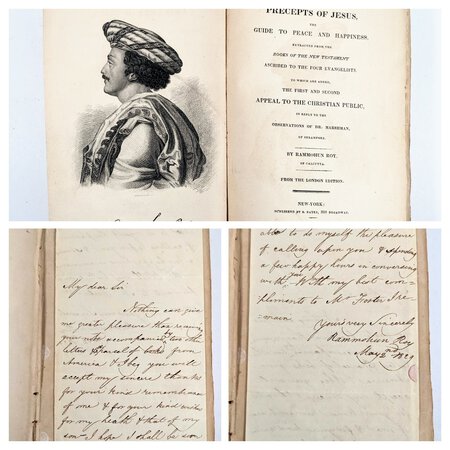 THE PRECEPTS OF JESUS - The Guide to Peace and Happiness, Extracted from the Books of the New Testament Ascribed to the Four Evangelists. - To Which Are Added, The First, Second, and Final Appeal to the Christian Public in Reply to the Observations of Dr. Marshman, of Serampore. BY RAMMOHUN ROY, of CALCUTTA.

LAID-IN is a HANDWRITTEN LETTER, SIGNED and DATED by RAMMOHUN ROY, written on both sides of a 5x8 inch (12.5x20 cm) piece of paper. The letter reads:

"My dear Sir / Nothing can give me greater pleasure than receiving your note accompanied by two other letters and a parcel of books from America and I beg you will accept my sincere thanks for your kind remembrance of me and for your kind wishes for my health and that of my son. / I hope I shall be able to do myself the pleasure of calling upon you and spending a few happy hours in conversation with you. / With my best compliments to Mr. Foster I remain / Yours very Sincerely / Rammohun Roy / May 2nd 1829."

ASSOCIATIONS in the LETTER and the BOOK:

MR. FOSTER, to whom the LETTER is written, is most certainly REV. JOHN FOSTER, the noted BRITISH ESSAYIST and MINISTER who, in his later years lived in Stapleton, Gloucestershire, making him a neighbor of Raja Ram Mohun Roy who, in his later years, lived at Stapleton Grove. John Foster and the Raja became close and had many discussions. John Foster, along with Rammohun Roy, became involved in the Serampore missionaries controversy. John Foster was one of a small group of mourners invited to the private funeral of Rammohun Roy that took place on October 18, 1933, on the grounds of Stapleton Grove. (See "John Foster Essayist" on Wikipedia.)

The BOOK has the ownership SIGNATURE of SAMUEL JOSEPH MAY on the rear pastedown, and that of his son JOSEPH MAY on the front pastedown. Samuel Joseph May's signature is florid, bright and clear, Joseph May's signature on the front pastedown has been inked out but is still legible. SAMUEL JOSEPH MAY was an important American Abolitionist, Women's Rights Advocate, Supporter of Universal Education, and Unitarian Minister. In America he championed many of the same causes that Rammohun Roy advocated. (See "Samuel Joseph May" on Wikipedia.)

The LETTER is in VERY GOOD condition, it has a couple horizontal folds and a couple associated folds likely made to fit it into an envelope (no envelope is present), there are remnants of several pea-size hinge tags on the rear left margin where the book was hinged onto the first "Preface" page (the hinges look like they could be removed with care but I have left them as is), overall the letter is solid and clean with writing that is bright and clear.

The BOOK is in FAIR condition, the covers are disbound but present, the boards have scrapes and are worn through along the edges, the spine cloth covering is toned, peeling and worn at the ends, and has scrapes and creases, the title label is chipped and worn; internally, the front pastedown has white paper remnants likely from a removed bookplate and the signature of Joseph May that has been inked out but is still legible, there is a loose and edge chipped front and rear blank endpaper, the frontispiece and title pages are coming loose at the top 2 inches but holding, the pages have lightly toned, many sections are cracked at the binding but not split (i.e. the text block is shaky but holding), there are scattered pencil margin check marks and lines noting certain passages, and a few relevant pencil margin notes (perhaps by Joseph May?), overall the text is complete with printing that is bright, clean, clear and legible throughout.

RAMMOHUN ROY HANDWRITTEN LETTER in a nearly impossible to find 1825 edition of his book PRECEPTS OF JESUS together with important ASSOCIATIONS.