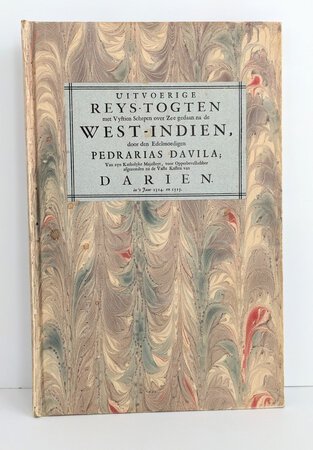 Account of the VOYAGE of PEDRO ADRIAS DÁVILA to the WEST-INDIES / CARIBBEAN and the COAST of PANAMA, with an Engraved Folding MAP and 8 Engraved PLATES.

(EXTENSIVE VOYAGES with Fifteen Ships across the Sea to the WEST INDIES, by the Noble-Hearted PEDRO ARIAS DAVILA, for his Catholic Majesty...sent to the Vast Coasts of DARIEN. In the Year 1514 and 1515.)

An early Dutch translation of the Spanish work first printed in Madrid, 1601. Also published by Pieter Vander Aa as part of his monumental work: Naaukeurige Versameling der Gedenk-Waardigste Zee en Land-Reysen na Oost en West-Indien (Collection of the Most Memorable Sea and Land Voyages to the East and West Indies).

ILLUSTRATED with a FOLDING MAP and EIGHT ENGRAVED PLATES.

VERY GOOD condition, the covers are solid and attractive; the bound in pages have just a spot or two of foxing here and there, otherwise bright, clean and unmarked; the map has a 1/2 inch closed tear at the bottom vertical fold (not touching the image), otherwise it is brilliant. One of the nicest copies of this book and map that I have seen.

About PEDRO ARIAS DÁVILA (from Wikipedia):

******Pedro Arias Davila was a Spanish explorer who led the first great expedition to the New World. Arias Davila established colonies in Panama and Nicaragua, and was responsible for other explorations in Costa Rica and Peru. This map was designed to illustrate his explorations in Central America, northern South America, and the Caribbean. The title cartouche features two natives with several wild animals in the background. This map was published in van der Aa's compilation of early voyages of exploration.******

About Pieter van der Aa, Engraver and Publisher (from Wikipedia):

******Pieter van der Aa, b.1659 d.1733, was a Dutch publisher and engraver best known for preparing maps and atlases, though he also printed editions of foreign and illustrated books. He also printed many maps...His ambition to become Leiden's most famous printer was fulfilled in 1715 with his appointment to head printer for the city and its university...His Dutch collection of travels to the East and West Indies were published as improvements of earlier printings.******

About PALAU, Bibliographer (from Wikipedia):

******Antoni Palau Dulcet, b.1867 d.1954, bookseller and bibliographer, best known as the author of an indispensable Manual del librero hispano-americano (Handbook of the Spanish-American bookseller). In its second edition it consisted of 28 volumes published between 1948 and 1977 and seven volumes of indices between 1981 and 1987 by Agustín Palau Claveras with: Alphabetical title-materials, corrections and additions connections, a total of 35 volumes.******