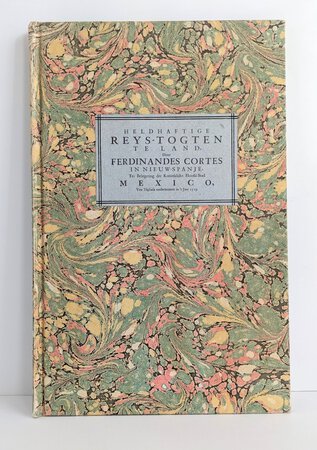 Account of the SIEGE OF MEXICO by FERNANDO CORTEZ in 1519, with 9 ENGRAVED PLATES..

(HEROIC OVERLAND JOURNEY, By FERNANDES CORTES in NEW SPAIN, to ATTACK the Royal Capital MEXICO, Tlaxcala, in The Year 1519.)

An early Dutch translation of the Spanish work first printed in Madrid, 1601. Also published by Pieter Vander Aa as part of his monumental work: Naaukeurige Versameling der Gedenk-Waardigste Zee en Land-Reysen na Oost en West-Indien (Collection of the Most Memorable Sea and Land Voyages to the East and West Indies).

VERY GOOD condition, the covers are solid and attractive; the bound in pages have light foxing here and there, overall bright, clean and unmarked. One of the nicest copies of this book and map that I have seen.

About CORTES (from Wikipedia):

Hernán Cortés de Monroy y Pizarro Altamirano, 1st Marquess of the Valley of Oaxaca, b.1485 d.1547, was a Spanish conquistador who led an expedition that caused the fall of the Aztec Empire and brought large portions of what is now mainland Mexico under the rule of the King of Castile in the early 16th century. Cortés was part of the generation of Spanish explorers and conquistadors who began the first phase of the Spanish colonization of the Americas.

About Pieter van der Aa, Engraver and Publisher (from Wikipedia):

******Pieter van der Aa, b.1659 d.1733, was a Dutch publisher and engraver best known for preparing maps and atlases, though he also printed editions of foreign and illustrated books. He also printed many maps...His ambition to become Leiden's most famous printer was fulfilled in 1715 with his appointment to head printer for the city and its university...His Dutch collection of travels to the East and West Indies were published as improvements of earlier printings.******

About PALAU, Bibliographer (from Wikipedia):

******Antoni Palau Dulcet, b.1867 d.1954, bookseller and bibliographer, best known as the author of an indispensable Manual del librero hispano-americano (Handbook of the Spanish-American bookseller). In its second edition it consisted of 28 volumes published between 1948 and 1977 and seven volumes of indices between 1981 and 1987 by Agustín Palau Claveras with: Alphabetical title materials, corrections and additions connections, a total of 35 volumes.******