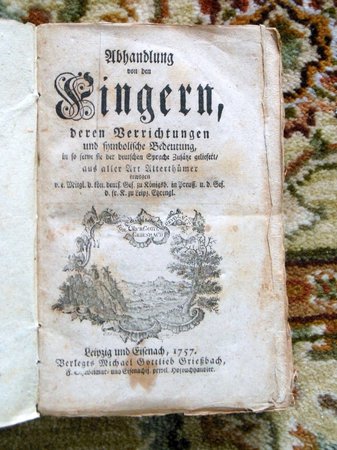 Rare study of the aspects of the hand, finger by finger, with historical, literary, scientific, and occult references to our digits.

Later Plain Paper Wrappers, 5x7.25 inches. Pagination: [14] prelim pages (title page and introductory pages), 312 numbered pages, [24] Register and Errata. Illustrated with Engraved Printer's Device on the title-page and on the last page of Errata, and with a few head and tail pieces.

Condition: The pages are toned / lightly browned with age, there is some foxing throughout (heavy on only a few pages), overall the pages are bright and the printing is clear and fully legible. A nicely maintained vintage book.

About FRIEDRICH GROSCHUFF (from a German Internet site):

****** Groschuff (1700-1784), German philologist. He studied theology and law at Konigsburg and Leipzig and then tutored several noble families. He was the secretary of Prince Wilhelm of Hesse-Philippstahl, governor of Breda. He afterwards served as a lawyer and counselor. He published a number of works on various subjects, including two on hands and fingers******