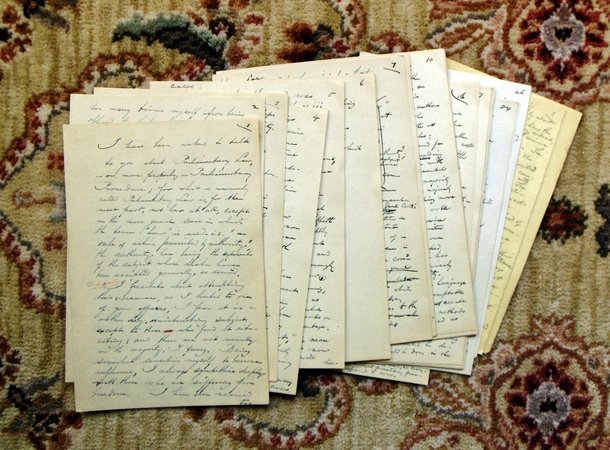 1917 HENRY DINGLEY COOLIDGE - 35 HANDWRITTEN PAGES - LECTURE ON PARLIAMENTARY LAW & PROCEDURE. His personal, manuscript lecture notes, with many hand corrections and changes, for a lecture he gave at a "Parliamentary Club" meeting. The pages are hand numbered, some numbered "a" and "b" (e.g. 30a, 30b); 35 total pages. Handwritten on one side of 6" x 9" sheets of paper (a few sheets are somewhat smaller). Most of the paper is plain paper, originally blank on both sides. Some of the latter sheets are written on the blank backsides of paper that is printed with "THE COMMONWEALTH OF MASSACHUSETTS - 1917 - AN ACT" and associated information on the other side (i.e.the original printed documents were being reused as scrap paper for these lecture notes). The lecture notes are undated, insofar as I can tell, but I'm assuming 1917 based on the date on the printed backsides of a few sheets. Along with these lecture notes are 3 sealed envelopes with "HENRY DINGLEY COOLIDGE / CONCORD, MASSACHUSETTS" printed on the envelope flap (the envelopes are sealed, but there is nothing inside, and they are unopened); a piece of unused printed stationery; and a letter addressed to "Mr. Henry D. Coolidge, Clerk to the Senate, Concord, Mass." on "The Commonwealth of Massachusetts / Executive Chamber / State House, Boston" letterhead. The letter is signed by (?). It is in response to a recommendation by Coolidge for the appointment of Henry J. Walcott to some position or other. The letter is dated August 1, 1910. Condition: The sheets are toned and have some signs of light handling, wear and use; but overall they are clean, bright, clear and fully legible. About HENRY DINGLEY COOLIDGE (from the Internet): ******Massachusetts Senate Clerk Henry Dingley Coolidge (1858-1922). Coolidge, a direct descendant of Mayflower pilgrim William White, served as Clerk for the Massachusetts Senate for 33 years. He is known for writing the revised and updated "MANUAL FOR THE USE OF THE GENERAL COURT" in 1889, and a number of subsequent revisions of the same book. Henry D. Coolidge's General Court Manual became an important, standard, widely used. legal reference work.******