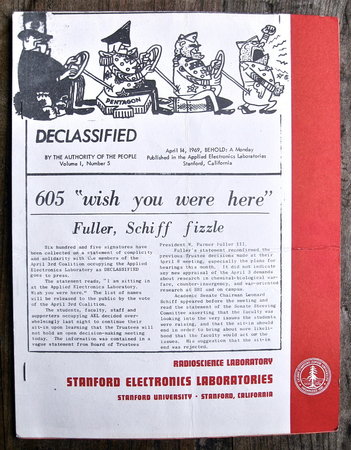 DECLASSIFIED: By Authority of the People. Volume I, Number 5.

April 14, 1969. Published in the Applied Electronics Laboratories, Stanford, California. This RARE ORIGINAL ISSUE was Printed on AEL Presses During the Nine-day Occupation. 8.5" x 11", Original Stanford Electronics Laboratories letterhead, side staple bound, 8 pages. "Declassified" began with the occupation of the Applied Electronics Laboratories (AEL). Printed between April 10 and May 12, the first issue was called "Unclassified", with subsequent issues titled "Declassified". On April 3, 1969 Stanford University students formed a coalition to take action against Vietnam War related research at Stanford. Backing up their demands with more direct action, they seized the Applied Electronics Laboratory on April 9, vowing to hold it until the administration capitulated. This nine-day sit-in at AEL, known as "The April Third Movement" ultimately brought an end to Stanford's secret military research. The students turned the laboratory printshop into an underground press distributing "Declassified" and other sensational exposés on AEL and the Stanford Research Institute (SRI). They managed to hold out for nine days until Stanford's president threatened to suspend them. Stanford Electronics Laboratories (SEL), part of SRI, had been running CIA sponsored electronic communications and surveillance research and other classified war contracts for the armed services. The April Third Movement was part of a national youth movement on university campuses across America - the Stanford students were successful in eliminating classified research at Stanford and contributing to the protests that ended the Vietnam War. This Rare Original Document is in GOOD CONDITION: Complete as issued. Just light wear, and stiff vertical/horizontal creasing affecting all the pages, from having been folded into quarters, otherwise bright, clean, and unmarked.