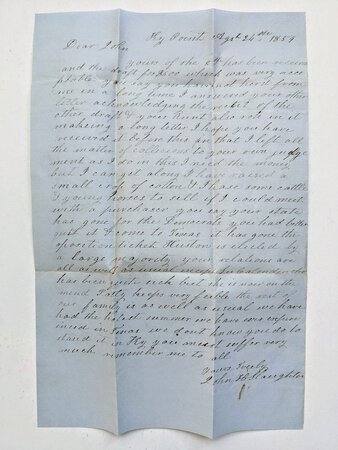 Important, Rare, Handwritten Letter by JOHN HORTON SLAUGHTER (aka TEXAS JOHN SLAUGHTER, SHERIFF SLAUGHTER, JOHN H. SLAUGHTER), written in 1859 when he was only 18 years old. Single Page Handwritten Letter, single sheet, light blue laid paper with a nickel size blind embossed emblem at the upper right corner, approximately 7.75 x 12 inches. GOOD condition, several folds where the letter was probably folded to fit into a small envelope (NO envelope is present), very small holes where a couple folds intersect, a few ink stains on the blank back side, otherwise solid with writing that is fully legible. Folded is how the letter was preserved and is its normal state. The letter was written to John H. Slaughter's 22 year old friend and trusted horse selling partner JOHN B. LINDSEY, of Frankfort, Kentucky. (The Lindsey / Lindsay family is an old and prominent Kentucky family, as are its relations.) The contents of the letter seem to indicate a familial relationship of some sort between the Slaughter and Lindsey family lines. This pre Civil War letter written at the age of 18 is by far the earliest letter of JOHN HORTON SLAUGHTER that I have seen. It gives a glimpse of his life and ambitions that have rarely, if ever, been recorded. The letter reads in great part: "(??) August 24, 1859. / Dear John / Yours of the 8th has been received and the draft for $500 which was very acceptable. You say you have not heard from me in a long time. I answered your other letter acknowledging the receipt of the other draft & your Aunt also wrote in it making a long letter. I hope you have received it before this in that I left all the matter of collections to your own judgement as I do in this need the money, but I can get along (as I?) have raised a small crop of cotton & I have some cattle & young horses to sell if I could meet with a purchaser. You say your state has gone for the Democrats. You had better quit it and come to Texas, it has gone the opposition ticket. Houston is elected by a large majority. Your relations are all well as usual except (?) who has been quite sick but she is now on the mend... the rest of our family is as well as usual... We don't know (what) you do to stand it in Ky. You must suffer very much. Remember me to all./

Yours Truly, John H. Slaughter." This letter was acquired in Northern California from the estate of a member of (per the estate listing): "a very prominent Southern family, offering... pre-and post-Civil War ephemera (letters and documents)..." Most of the interesting old documents I found related to the LINDSEY FAMILY of FRANKFORT, KENTUCKY, including many documents and letters of JOHN B. LINDSEY (born July 4, 1837, Frankfort, KY, died 1922, Frankfort, KY), among which was this letter. I also acquired an unpublished autobiography by Edwin S. Lindsey, the Grandson of John B. Lindsey. There is a paragraph on page 3 where he writes: "When he was a young man, Grandfather Lindsey had tuberculosis, the dreaded Great White Plague of that age. He went to Texas for better climate and was a horse trader, buying horses in Mexico and selling them in the U.S. West. Those were the wild days of the West, and many were his adventures, which will have to be omitted now. He recovered his health and returned to Frankfort, where he practiced law very successfully till he retired at the age of eighty four". This paragraph matches perfectly with the Slaughterhouse letter urging the young John Lindsey to leave Kentucky and join him in Texas. About JOHN HORTON SLAUGHTER (excerpted from Wikipedia): "John Horton Slaughter, b. 1841 d. 1922, also known as Texas John Slaughter, was an American lawman, cowboy, poker player and rancher in the Southwestern United States during the late 19th and early 20th centuries. After serving in the Confederate States Army during the American Civil War, Slaughter earned a reputation fighting hostile Indians and Mexican and American outlaws in the Arizona and New Mexico territories."