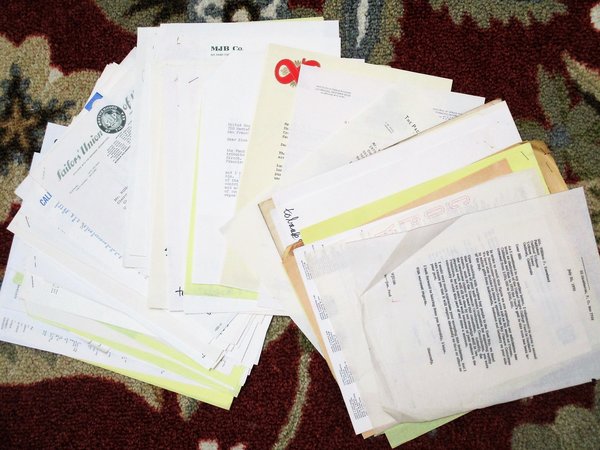 ARCHIVE of original HAND SIGNED LETTERS from PRESIDENTS & EXECUTIVES of MAJOR NORTHERN CALIFORNIA COMPANIES, and others, in RESPONSE to an APPEAL by WILLIAM ZELLERBACH for DONATIONS to the UNITED NEGRO COLLEGE FUND. The letters are all dated 1970 and are in response to an annual appeal for donations from William Zellerbach of Crown Zellerbach Corporation. Most letters are on printed company letterheads. The archive includes signed letters from: J. W. Hull, President, Pacific Telephone and Telegraph; Charles N. Huggins, President, SEE'S CANDIES; Peter N. T. Widdrington, President, LUCKY BREWERIES; Shermer L. Sibley, President, PG&E; Joseph E. Nolan, President, Weyerhaeuser Company; J.E. Gosline, Vice Chairman of the Board, STANDARD OIL COMPANY of CALIFORNIA; R.B. Sonne, Vice President, Del Monte Corp.; James R. Compton, Philanthropist; W. P. Murray Jr., President, Bank of Marin; Edgar F. Kaiser, Chairman of the Board, KAISER INDUSTRIES; A. B. Ordway, Executive, Kaiser, (Ordway Building in Oakland, was named after A.B. Ordway); Edward Bransten, President, MJB (Coffee); Edward J. Daly, President, WORLD AIRWAYS; Charles L. Gould, Publisher, San Francisco Examiner (Hearst Corporation); Richard E. Guggenheim, San Francisco, a partner in Heller Ehrman, White & McAuliffe; Morris Weisberger, Sailors' Union of the Pacific; JOHN F. HENNING, AFL-CIO; Werner Lewald, President, Transpacific Transportation Company; "Miss M. Conant" (Conant Family Foundation?); AND MANY MORE signed by various individuals working at a particular company, or not associated with any company. There are also copies of some of the letters sent out to various individuals and corporate heads. There are also some SIGNED typed notes, letters and hand written notes from William Zellerbach regarding various donations and letters received in response to the appeal for donations. In addition there are letters from JOHN PAUL, the Director of the UNCF Northern California Campaign, asking William Zellerbach if he would agree to be Chairman of the 1970 campaign, and telling him that it would take little work on his part (i.e. all the form letters would be written and printed for him, needing only his signature), and telling him that his name as Chairman would be of great help. It is clear that William Zellerbach took his position seriously, personalizing some of the appeals, and suggesting names for solicitation. The 1970 Northern California UNCF Campaign goal was $300,000 (equal to approximately $2 million today). The archive contains: (1) 45 SIGNED LETTERS written TO William J. Zellerbach in response to his (as Chairman for 1970) appeal for donations to the United Negro College Fund. Many of these letters are stapled to their envelopes. A few of the letters have handwritten notes on them by Bill Zellerbach. (2) 5 SIGNED typed letters BY William Zellerbach TO John Paul, Director of the UNCF campaign. The letters are Zellerbach's letterhead. They relate to various matters of the campaign. (3) 9 letters, some carbon copies, some original, regarding the recruiting of William Zellerbach to be Chairman of the 1970 campaign, his acceptance the position, and his approval of the form letter to be sent out. (4) A couple draft documents with numerous handwritten notes on them regarding how donations are to be handled ( i.e. accepted, put into the bank, etc.) (5) And some unsigned copies of solicitation letters that had been sent to various executives. All the letters are in generally GOOD condition, showing various signs of handling, but all remain bright and fully legible. A couple of the draft documents concerning the handling of donations were pieced together in strips, they are browned and show glue stains. A wonderful look at the Corporate and Individual Philanthropy in Northern California in 1970. The SIGNATURES of many of the areas Movers and Shakers make this quite a rare artifact. The generosity (and sometimes the amazing lack of it) is quite interesting.