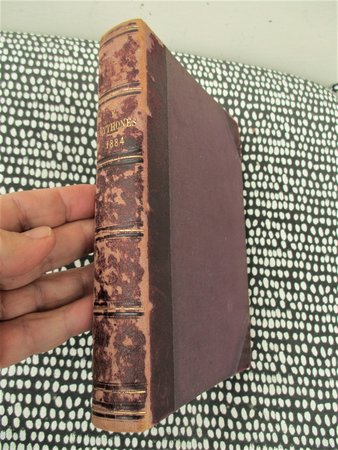 AT WASANAETH MERCHED A GWRAGEDD CYMRU. The periodical was edited by CRANOGWEN, the pseudonym of Sarah Jane Rees. VOLUME VI (CYF. VI). One volume only. Perhaps a bound collection was published at the end of every year of the publication, I do not know. TEXT in WELSH. LLANELLI: Argraffwyd A Chyhoeddwyd Gan D. Williams A'I Fab., 1884. First Edition of Volume VI. Hardcovers, leather covered spine and corners with pebbled cloth covered boards, 5.5x7.5 inches, 384 pages. Illustrated with drawings and fancy title letters. Y FRYTHONES was a monthly Welsh language periodical for women, with much of the contents written by women of Wales. The contents were religious, literary, and general in nature, including articles on religion, raising children, the family, and the home, as well as poetry, music, games and biographies of prominent women. All was in Welsh. The periodical was edited by the teacher, poet, and unconventional woman, Sarah Jane Rees. The periodical was founded in 1874 and ended publication in 1891. It was created to continue the work of the Welsh women's periodical Y GYMRAES which was published for only two years, 1850 and 1851. Y GYMRAES was created in response to a government report which had strongly criticized the lax morals of Welsh women. Both Y GYMRAES and then Y FRYTHONES set out to promote higher intellectual and moral standards for women in Wales. Previously owned by KATIE HUMPHREYS, with her bookplate on the front free endpaper, and by ROBERT OWEN, with his small ink stamped name on the front free endpaper and title page. At the bottom of the front pastedown is a small label of A. BROMLEY / Printer, Lithographer, Bookbinder, &c / High Street / BANGOR (WALES). It appears likely that KATIE HUMPHREYS and ROBERT OWEN were both from Bangor Wales, as both names show up prominently there. GOOD CONDITION: the leather spine covering is scraped and rubbed, and the leather corners are rubbed at their edges; the pebbled cloth covered boards have a few smudges; otherwise the coverts remain solid and are doing their job well; internally there is a bit of foxing and some creases here and there, else the pages are tight, bright, clean and clear. A solid, nice copy. About CRAGOGWEN, pseudonym of SARAH JANE REES (from Wikipedia): ******Sarah Jane Rees, b.1839 d.1916, also known as CRANOGWEN, was a Welsh poet, editor, teacher, temperance campaigner, and proto-suffragette. She had two long lesbian relationships. Sarah Jane Rees was born at Llangrannog in Cardiganshire, the daughter of a mariner John Rees. She was a precocious child and insisted that she accompany her father to sea rather than undertake sewing and cooking chores. She attended school in both Cardigan and New Quay, and for a time studied at a navigation school in London, where she gained her master's certificate, a qualification allowing her to command a ship in any part of the world. In 1859 Sarah Jane set up her own navigation school in her home village of Llangrannog. In addition to teaching navigation and other subjects, she became editor of the Welsh language women's periodical Y Frythones (1878 to 1889), a platform for Welsh bluestockings and proto-suffragettes. Rees had two significant same-sex relationships. Her first was with Fanny Rees, a milliner's daughter from Troedyraur, near LLangrannog. Fanny contracted tuberculosis and returned to Wales around 1874 to die. She moved into Rees' home rather than that of her family, and died in her arms. Rees commemorated Fanny in one of her best-known poems, Fy Ffrynd (My Friend). Her second relationship was with Jane Thomas, with whom she spent most of her life. Open about her unconventional domestic arrangement, Rees was nonetheless a committed Methodist.******