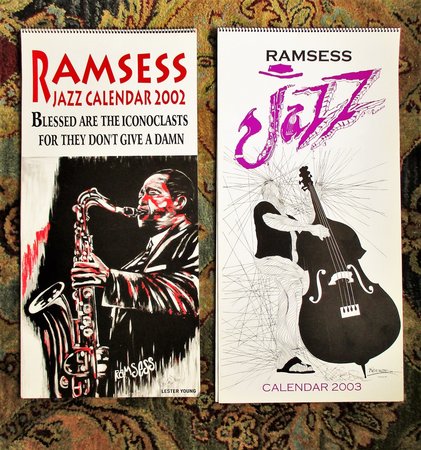 RAMSESS an AFRICAN-AMERICAN, LEIMERT PARK NEIGHBORHOOD of LOS ANGELES BASED, ARTIST. Lot of ELEVEN of his ORIGINAL, SELF-PRODUCED, JAZZ CALENDARS (including two duplicates). The Jazz Calendars measure 24x11 inches and have metal spiral bindings at the top. Each inner monthly page has a beautiful drawing of a Jazz musician or singer, mostly in b&w. Cover page drawings are in color. Calendar pages are printed on one side only, each suitable for framing imho. Every drawing in the calendars is unique (i.e. no drawings are repeated year to year). The calendars are UNUSED and in NEAR FINE condition, with perhaps just a touch of corner tip and/or spiral wear to a few. These RAMSESS JAZZ CALENDARS are collectible printed artworks. Though limitation is not stated it is known that these were all printed in limited numbers. SIX of the calendars are SIGNED by RAMSESS on the front cover, some somewhat obscurely with pen, some boldly with black marker; most are also DATED. The eleven calendars are for the years: 2002 (signed and dated 2001 at the bottom, above the printed name of Lester Young); 2003 (signed and dated 2002 at the bottom, just above the printed date of 2003); 2004 (signed and dated 2003 at the bottom white area); 2005 (signed and dated 2004 in the bottom area of the blue jacket image); 2007 Two Copies (ONE copy is signed along the white side margin); 2008 Two Copies (ONE copy is signed along the at the bottom); 2009, 2010, 2012. (The dated copies are each dated in the year prior to the year of the calendar because calendars are always printed well before the year they are marking.) Kisasi Ramsess, known as RAMSESS, was part of the revival, and has become part of the heart and soul, of the Leimert Park area of Los Angeles. Leimert Park has, over the years, become the L.A. center of both historical and contemporary African-American art, music, and culture. From the Estate of Albert Birdsong and Barbara Ruth Richardson Birdsong, of Benicia, California. Barbara Birdsong outlived her husband and died in 2018. She was originally from Shreveport, Louisiana. The Birdsongs had an interesting gathering of African American literature and ephemera. INTERNATIONAL BUYERS PLEASE NOTE: These 11 large format calendars are heavy and will be expensive to ship Internationally, requiring substantial additional shipping charges. After placing your order you will be notified of the additional charges and be able to accept or reject them before your payment is processed. Or you can contact us ahead of time to find out the shipping charge to your country. Thanks.