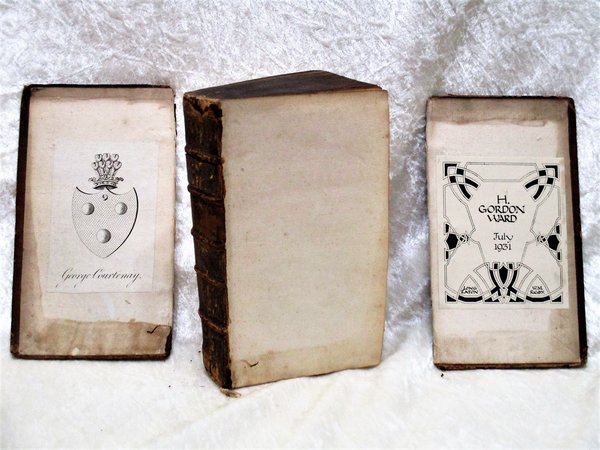 SCALIGERANA, THUANA, PERRONIANA, PITHONIANA, et COLOMESIANA : Ou Remargues Historiques, Critiques, Morales, & Litteraires De Jos. SCALIGER, J. Aug. de Thou, le CARDIANAL Du PERRON, Fr. Pithou, & P. Columie's avec les Notes de Plusieurs Savants. TOME PREMIER. By J. J. SCALIGER (Joseph Justus Scaliger). Published in AMSTERDAM, Chez Covens & Mortier, MDCCXL (1740). Tome Premier / Volume One ONLY (of two volumes). Hardcovers, leather covered boards, five raised spine bands, spine title label, 12mo., 3.75x6.75 inches (9x16.5 cm). Pagination: [xiv], 628, [1] pages. Title page printed in black & red. Two Interesting BOOKPLATES and ASSOCIATIONS. (1) A Spade Shield Bookplate of GEORGE COURTENAY, is on the front pastedown. It measures 2.5x4.5 inches (6x9.5 cm). The Courtenays were Baronets at one time. (2) An Art Deco style Bookplate of H. GORDON WARD, with the printed date JULY 1931, is on the rear pastedown. This bookplate also has "Long Eaton" and "W.M. Rigby" printed in smaller font at its bottom. From my limited research it seems that H. Gordon Ward was a book collector and scholar. Both bookplates are worthy of further research, imho. CONDITION: The front and rear covers are disbound (i.e. present but laid on loosely), the leather covered boards are scraped and rubbed, the spine covering is split, rubbed, and cracked, and it is chipped at its ends, but remains well attached to the text block; the gilt on the spine title label has mostly rubbed away; internally, the inner hinge is cracked at a few places but remains bound with its sewn binding, the pages are lightly toned and have a few spots and creases here and there, there are a few relevant previous owners margin notes in pencil, otherwise the pages are tight, bright, clean, clear and unmarked. SCARCE 1740 BOOK by SCALIGER with Two Interesting BOOKPLATES. About JOSEPH JUSTUS SCALIGER (excerpted from Wikipedia): ******Joseph Justus Scaliger, b. 1540 d. 1609, was a French religious leader and scholar, known for expanding the notion of classical history from Greek and ancient Roman history to include Persian, Babylonian, Jewish and ancient Egyptian history. He spent the last sixteen years of his life in the Netherlands. During the first seven years of his residence at Leiden his reputation was at its highest point. His literary judgement was unquestioned. From his throne at Leiden he ruled the learned world; a word from him could make or mar a rising reputation. At the same time, Scaliger had made numerous enemies. He hated ignorance, but he hated still more half-learning, and most of all dishonesty in argument or in quotation. He had no toleration for the disingenuous argument and the misstatements of facts of those who wrote to support a theory or to defend an unsound cause. His pungent sarcasm soon reached the ears of the persons who were its object, and his pen was not less bitter than his tongue. He was conscious of his power, and not always sufficiently cautious or sufficiently gentle in its exercise. He made many enemies. The results of his method of historical criticism threatened the Catholic controversialists and the authenticity of many of the documents on which they relied. The Jesuits, who aspired to be the source of all scholarship and criticism, saw the writings and authority of Scaliger as a formidable barrier to their claims. Scaliger was known to be an irreconcilable Protestant and as long as his intellectual supremacy was unquestioned, the Protestants had the advantage in learning and scholarship. His enemies therefore aimed to attack him as a man and to destroy his reputation. This was no easy task, for his moral character was high. Nonetheless, in 1607 the Jesuits successfully attacked Scaliger by publishing a 400 page tome that purportedly exposed 500 lies in Scaliger's works. This was said to have broken Scaliger's spirit, and two years later he died.******