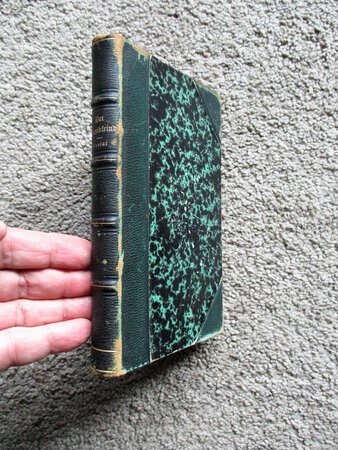 1838 Gustav Nicolai DER MUSIKFEIND: EIN NACHTSTÜCK German Novel about the POISONING a MUSICAL GENIUS Loosely Based on the Conspiracy Theory that Mozart was Poisoned by Solieri

A novel about a fictional young musical genius who is poisoned by a jealous colleague. It is a dark and moody tale, loosely based on the idea that Mozart was poisoned by fellow composer, Antonio Salieri.

GOOD condition: The covers are rubbed along the edges, corners, spine ends and spine folds, but are still sturdy and attractive; internally, there is a previous owner's name on the front free endpaper and bookplate on the front pastedown, light foxing and age spots to the pages, otherwise the pages are tight, bright, clean and unmarked. A solid, presentable copy of this unusual novel.

About the author GUSTAV NICOLAI:

******Gustav Alexander Wilhelm Nicolai, b.1795 d.1868, was a German writer and composer. His friends included the composers Adolf Bernhard Marx, Gaspare Spontini and Carl Loewe, for whom he wrote the oratorio libretto Die Zerstörung von Jerusalem, set to music by Loewe in 1833. Frederick William III of Prussia rewarded Nicolai with a golden box for the same libretto. The king was one of his main supporters, giving him the Gold Medal for Art and Science. Nicolai became widely known for his writing, especially his travelogue on Italy. Nicolai corresponded with Robert Schumann and wrote several books including Der Musikfeind: Ein Nachtstück.******