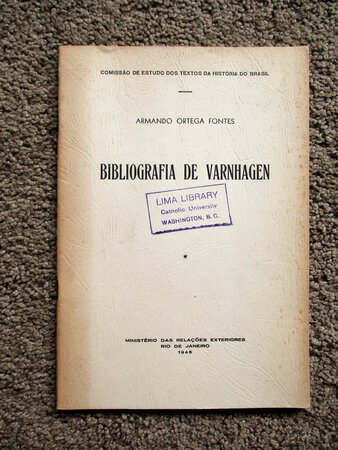 Softcovers, 42 pages plus 4 plates reproducing title pages from four of his books.

GOOD condition: there is the stamp of "LIMA LIBRARY / Catholic University / Washington D.C." (from where the booklet was deaccessioned) on the front cover, but no other library stamps or marks; the covers are toned at the margins and have some light foxing; internally, light toning to the margins, otherwise tight, bright, clean, clear and unmarked. A solid, presentable copy.

An interesting and important bibliographical reference for anyone interested in the history of Brazil.

******Francisco Adolfo de Varnhagen, Viscount of Porto Seguro, b.1816 d.1878, was a Brazilian diplomat and historian. He is the patron of the 39th chair of the Brazilian Academy of Letters. He is considered the father of modern Brazilian historical scholarship. He published the first volume of his masterpiece, História Geral do Brasil, in 1854. Its second volume was published in 1857.******