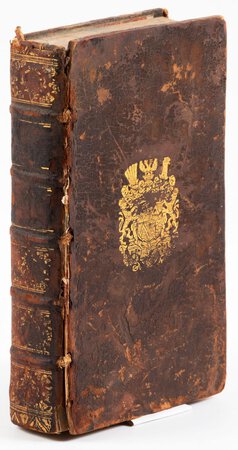 The Hamburgisches Magazin was a scientific journal containing essays, letters to the editor, etc., on the natural and physical sciences, often highlighting work from foreign scientists translated into German.

GREAT ASSOCIATION COPY. There is an OWNERSHIP BOOKPLATE of JOHANN FRIEDRICH BLUMENBACH, b.1752 d. 1840, on the front pastedown. Blumenbach was one of Germany's most important and influential early anthropologists. The bookplate has his PRINTED SIGNATURE on its face. I feel the Signature is PRINTED even though others claim it is HAND SIGNED / AUTOGRAPH. The two copies I found online, one held by a noted HISTORY OF SCIENCE bookseller and another held by the important Herzog August Bibliothek (Herzog August Library), claim that the signature on Blumenbach's bookplates is HAND SIGNED. However, the signatures on both the examples presented online, and mine, are EXACT in even the minutest details, and convince me that this is a printed signature. I have seen his signature on documents in the past and, like all signatures, they all had noticeable, even if sometimes small, deviations. These three examples have none that I can detect. A RARE BOOKPLATE and IMPORTANT ASSOCIATION COPY.

GOOD MINUS CONDITION: The front cover is detached but present, the rear cover is just holding on with the cord bindings, the leather spine title labels are missing and the spine gilt has substantially worn off, the leather covered boards are rubbed and scraped, the gilt coat-of-arms on the front and rear covers is bright but scratched and rubbed; the marbling on the top edges has faded away but is visible on the front and bottom page edges; internally, there is light browning and spotting throughout but the text is always clear and fully legible, overall the pages remain tightly bound, clean and unmarked. A complete, presentable copy with a detached front cover.

This publication is often found disbound with the various articles sold separately. It is hard to find a complete volume (i.e. 6 bound issues).

RARE with the ownership bookplate of the great natural scientist Johann Friedrich Blumenbach.

About JOHANN FRIEDRICH BLUMENBACH (from Wikipedia):

******Johann Friedrich Blumenbach, b.1752 d.1840, was a German physician, naturalist, physiologist, and anthropologist. He is considered to be a main founder of zoology and anthropology as comparative, scientific disciplines. He was also important as a race theorist.

He was one of the first to explore the study of the human being as an aspect of natural history. His teachings in comparative anatomy were applied to his classification of human races, of which he claimed there were five, Caucasian, Mongolian, Malayan, Ethiopian, and American. He was a member of what modern historians call the Göttingen School of History.

Blumenbach's contemporaries considered him one of the great theorists of his day and a leading light of German science. Kant and Friedrich Schelling both called him "one of the most profound biological theorists of the modern era". In the words of science historian Peter Watson, "roughly half the German biologists during the early nineteenth century studied under him or were greatly influenced by him".******