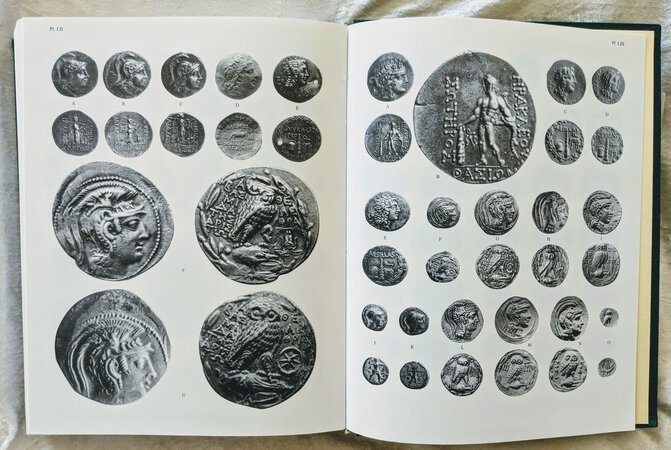 (HISTORY of the MITHRIDATIC WARS as SEEN through its COINS, by Francois de Callatay.)

SIGNED, INSCRIBED and DATED by the AUTHOR on the half title page: "March 15, 2003 / To my friend Buzz Owen / With all my very best wishes / François de Callatay".

Also, laid-in is a brief handwritten letter from the author, along with its mailing envelope. "Brussels / January 14th, 2003 / To Buzz (Owen) / The most enthusiastic buyer of my Mithridatic book! With recent but true friendship! / Francois (de Callatay)". The return address on the envelope is Koninklijke Bibliotheek Van Belgie (The Royal Library of Belgium) where Francois de Callatay was head of the Cabinet des Medailles.

RARE, especially so SIGNED and INSCRIBED.

About the MITHRIDATIC WARS (from Wikipedia):

******The Mithridatic Wars were three conflicts fought by Rome against the Kingdom of Pontus and its allies between 88 BC and 63 BC. They are named after Mithridates VI, the King of Pontus who initiated the hostilities after annexing the Roman province of Asia into its Pontic Empire (that came to include most of Asia Minor) and committing massacres against the local Roman population known as the Asian Vespers.******

About François de Callatay (from Wikipedia):

******François de Callatay, b.1961, is a Belgian ancient historian, professor at the École Pratique des Hautes Études (Sorbonne - Paris), who has written significant studies of coinage in the ancient Mediterranean world.******

INTERNATIONAL BIDDERS PLEASE NOTE: This book is heavy and will require substantial additional shipping charges. After placing your order you will be notified of the charges and be able to accept or reject them before payment is taken. Thanks!