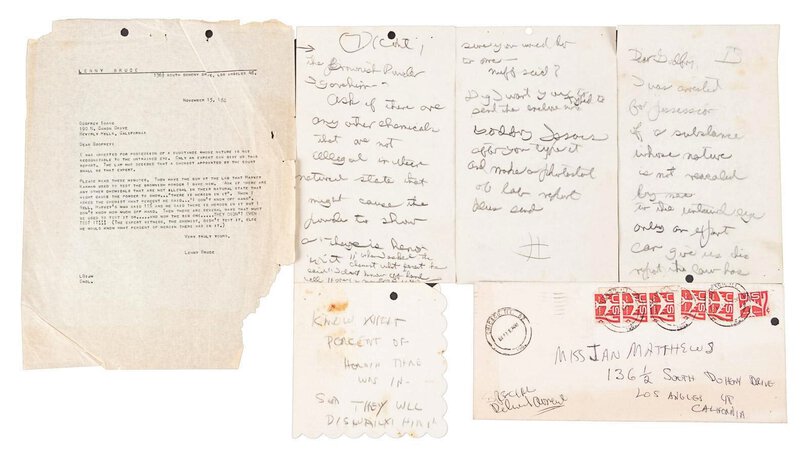 Lenny Bruce's HANDWRITTEN NOTES to his SECRETARY, JAN MATTHEWS, with instructions for a letter to be sent to his ATTORNEY, Godfrey Isaac. The notes are written on both sides of four 5x8 inch notepad sheets and both sides of a cocktail napkin (i.e. on ten sides).

A typed, 8.5x11 inch carbon LETTER to his Attorney composed by Bruce's secretary from his notes.

The envelope Bruce used to send his notes to his secretary. The address is HAND WRITTEN by Lenny Bruce. The envelope is stamped and postmarked "Chicago November 13, 1962" then "Los Angeles, November 14, 1962". Interestingly, Bruce sealed the envelope with a "Solomon's Cedar Street Liquors / Chicago" sticker.

The notes and letter concern Bruce's upcoming Los Angeles trial on heroin charges. They contain ideas Bruce believed his attorney could use for his defense, such as: the heroin wasn't tested correctly, no one knows for certain if it was heroin, the lab tests were not done correctly, the powder was unidentifiable, etc.

Lenny Bruce must have come up with these ideas while drinking at a bar, as the cocktail napkin seems to contain his initial thoughts. It's amazing that his secretary was able to form these somewhat rambling notes into a sensible letter, but she did.

The LETTER is a carbon copy of the letter sent to Bruce's attorney, presumably a file copy. It is typed on Lenny Bruce's personal letterhead, and dated November 15, 1962 (the day after the envelope containing Bruce's notes was postmarked as received in Los Angeles). Typed at the bottom is "LB:JM", i.e. Lenny Bruce / Jan Matthews. It is an unsigned carbon.

The letter reads in part: "I was arrested for possession of a substance whose nature is not recognizable to the untrained eye - only an expert can give this report...Ask if there are any other chemicals that are not illegal in their natural state that might cause the powder to show...there is heroin in it...The expert witness, the chemist, didn't test it, else he would know what percent of heroin there was in it...Very truly yours, Lenny Bruce."

CONDITION: The four note sheets and cocktail napkin show some signs of age, handling and use, but are solid and the handwriting is bold, bright and clear; the carbon letter has its lower corner torn off and substantial edge wear, edge tears and creasing, though not significantly affecting the text which is clear and entirely legible.

Bruce's Los Angeles drug charges were dropped before they went to trial, but these notes and letter from November 1962 show the relentless hounding by the legal system that Lenny Bruce was having to bear. He died four years after writing these notes, in 1966, at the age of forty.

Attorney Godfrey Isaac died in 2015 at the age of 90. He represented some of Hollywood's elite in civil and family matters, including Judy Garland and Anthony Quinn. He was also a criminal attorney and, in addition to Lenny Bruce, represented Watergate defendant Charles Colson and RFK assassin Sirhan Sirhan.