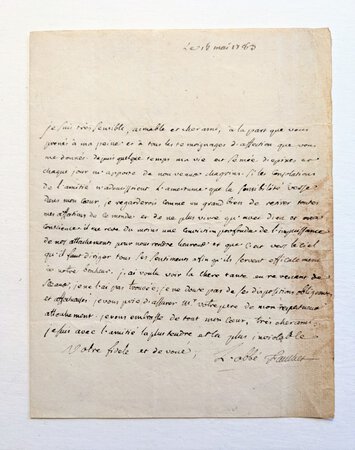 CLAUDE FAUCHET - FRENCH BISHOP who STORMED THE BASTILLE and EULOGIZED BENJAMIN FRANKLIN - HANDWRITTEN, SIGNED, WORRIED LETTER dated 1783 - HE was GUILLOTINED on HALLOWEEN in 1793

SIGNED, HANDWRITTEN LETTER from the French Bishop CLAUDE FAUCHET to a M. CHEVIN, Fils. Dated May 15, 1783. In French.

Single page letter written on a single fold sheet of laid, watermarked paper, with an address leaf and wax seal on the backside. The letter measures 8.5x12 inches (20x31.5 cm). A typed translation is provided on a sheet of paper that has browned and is a bit brittle with age (1940s?).

The letter is written to a close friend, M. Chevin, fils. It is warm and intimate. Fauchet tells that his life is beset with "thorns" and "grief", likely troubles related to the bubbling 1789 French Revolution. Though a Revolutionist himself, Fauchet was tried and guillotined by the Revolutionists in 1993. The letter begins:

"I am very touched, my dear friend, by the part you take in my trouble and for all the evidences of affection you have shown me...for some time my life has been beset with thorns and every day brings me new grief. If the consolations of friendship did not sweeten the bitterness which pours into my heart, I would consider it a great blessing to withdraw from this world and to live only with God and my conscience."

Condition: Age toning, several original folds, tear where the letter was opened not affecting text. Overall this 1783 letter remains in GOOD condition, the writing is bright and clear, the wax seal shines, the paper's watermark is visible.

RARE FRENCH REVOLUTION ERA DOCUMENT by a BISHOP who STORMED THE BASTILLE WITH the REVOLUTIONISTS and was THEN GUILLOTINED BY THEM.

About CLAUDE FAUCHET (from Wikipedia):

He was born at Dornes, Nièvre. He was a curate of the church of St Roch, Paris, when he was engaged as tutor to the children of the marquis of Choiseul, brother of Louis XVs minister, an appointment which proved to be the first step to fortune. He was successively grand vicar to the archbishop of Bourges, preacher to the king, and abbot of Montfort-Le Carre.

HE WAS ONE OF THE LEADERS OF THE ATTACK ON THE BASTILLE, and on 5 August 1789 he delivered an eloquent discourse by way of funeral sermon for the citizens slain on 14 July, taking as his text the words of St Paul, 'Ye have been called to liberty".

He blessed the tricolor flag for the National Guard and in September was elected to the Commune. In 1790 he wrote France's Eulogy to Benjamin Franklin (Eloge Civique De Benjamin Franklin). He retired from the Commune in October 1790. During the next winter he organized within the Palais Royal the Social Club of the Society of the Friends of Truth, presiding over crowded meetings under the self assumed title of procureur général de la vérité. Nevertheless, events were marching faster than his opinions, and the last occasion on which he carried his public with him was in a sermon preached at Notre Dame on 4 February 1791.

In July 1793 he was imprisoned on the charge of supporting the federalist movement at Caen. He was brought before the Revolutionary Tribunal on 30 October, and was guillotined on the following day, October 31 (Halloween!!!)."******